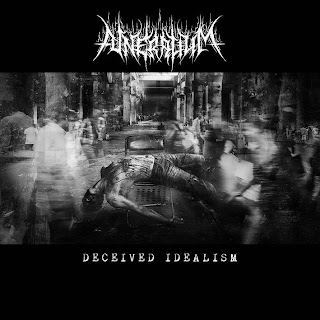 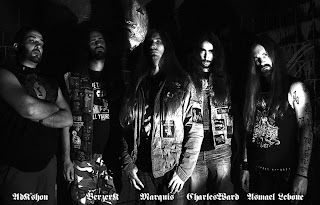 There is only so much one can write about the genre of funeral doom before things start to sound repetitive, so forgive me if this sounds a lot like a lot of other reviews. I remember first discovering the genre through and in the later stages of looking through it finding the group called Funeralium with one self-titled album and a demo (which I have not heard yet). Though the genre is far from having groups that fill it with ingenuity and unique ideas with every release, I was still interested to hear what this band would do.
Six tracks. Two of them under ten minutes, two of them over twenty. What are you in for when you press play on this double-album? Has anyone who's read this blog before heard the band Venowl based off of the several reviews I've given the band? If you have, you'll sort of know what to expect from this album. It's slow moving (I mean, really slow moving) and very bleak sounding. If you've heard a funeral doom record before, you know what to expect here. There's definitely a comparison between opener Blood, Phlegm and Vomit and what Venowl have done, and even closer to the band they site as an influence, Senthil. It has that very improvisational sort of tone where you have feedback in the background somehow creating an ambiance to the recording in addition to seemingly random screams from other members of the band. I don't want to say they're ripping off Senthil here, but that opening track just sounds really close to what that band did and what Venowl have been doing on their more funeral doom tracks. After that track though, you pretty much just fall into your typical funeral doom sounds though, for better or worse.
I guess what one could say Funeralium have on their peers is that they certainly don't try to dress up their albums in any sort of fancy production or use any tracks to make their albums sound better. I'd imagine the sound of these six songs on here will be pretty much how they'll sound live as well, except maybe less dank, because this album sounds dank. It has that sort of vibe where I almost imagine the band playing this, or recording it, in somebody's wet basement cellar with water dripping through the ceiling, light bulbs barely flickering on, metal shelves and containers littering the ground. Just very dark, very depressing, very funeral doom. Despite what the band say, this is a funeral doom album with the occasional black metal burst. At it's best, so a track like 21st Century Ineptia, the band manage to make both the droning doom sections, that could otherwise prove to be quite lifeless, the bursts of feedback, and the occasional burst of black metal tremolo picking join together into a well crafted piece of music that has it's ups and downs sonically. I have to say that during the climax of this song in particular, the band channel into something that is almost post-rock inspired. At it's worst, you have a track like Hang These Bastards, which is pretty standard funeral doom despite only being six minutes long. It doesn't bring anything new to the band beyond being one of the shortest tracks they have in their relatively short catalog now.
It has to be said that anyone who comes into a funeral doom record expecting to hear riffs obviously doesn't know what they're coming into because this record, despite what the intro of the title-track would have you believe, is not full of slow-paced riffs. Yes, that opening is perhaps the one and only except to this on the entire record. So, if that opening grabbed you, good, just don't believe that the rest of the album is quite as memorable as that intro. In fact, the rest of that track isn't even up to the intro - not in a bad way mind you, but in that nothing else during that title-track will likely stay with you beyond that opening riff. As the longest track on the entire disc, standing just over twenty-five minutes in length, it is probably the track on here that harks back to classic doom metal bands the most in it's use of guitar phrasing. For a band that has been all about doom and gloom up until now, this one song has the potential to breach out and actually bring in new people - as long as they realize the above statement.
So, overall, this is a solid enough album with enough to satisfy the average funeral doom listener and maybe the average doom listener as well. The song lengths do still make this album a bit daunting to listen straight through, but if you can get over that, then give this one a shot. Funeral doom solid enough to please any fan, what more could you want?
Overall Score: 8
Highlights: 21st Century Ineptia, Deceived Idealism
Posted by maskofgojira at 2:52 PM