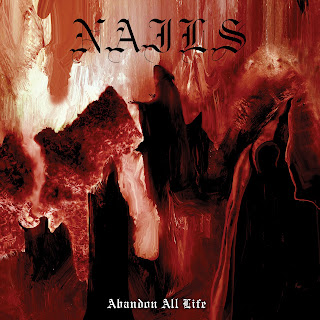 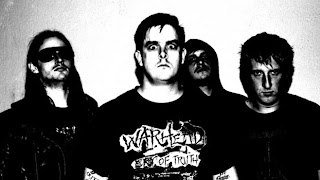 Who doesn't love Nails by now? They pretty much encapsulate everything good about the whole powerviolence and crusty hardcore and grindcore sound of today. Plus, how can you not have respect for a group who can aurally assault you more in under twenty minutes than most bands manage to in the span of around forty minutes to an hour.
What I love so much about this band is how it's just everything that I want in a hardcore and/or grindcore band. It's dirty and crusty but still very clear in what they're doing. Working with Kurt Ballou on production also clears up an issue I have with a lot of bands of this style that feature clearer production - emotion. I've said it many times and it remains true every time I put on a new hardcore record, or powerviolence, or grindcore record - I want to hear that the musicians are into what they're playing and are passionate about it. I don't know any reason why a person would want to listen to music like that if it doesn't come from the heart, or wherever these guys feel emotion. Nails has nailed that (no pun intended) on their past releases and keep it up on this one as well. The recording is stellar (as always coming from Ballou) and really captures the rage and ferocity that these guys have when they play. It's right in your face and relentless without becoming irritating. I will agree with those who have said that it isn't all that different from 2010's breakthrough Unsilent Death, but I don't need it to be when the songs, and entire album, are as short as they are. The fact that these guys wrote nine new songs, Cry Wolf was on the Skin Like Iron split from last year, that are still just as pummeling and exciting as the songs on that record amazes me. I do admire that the band have decided to extended some of their tracks beyond the minute mark, half the album featuring songs that top a minute while closer Suum Cuique actually tops the five minute mark, by increasing the amount of doom/sludge parts in their songs. I also appreciate the influx of black metal into the band's sound on a few tracks as well.
This is just a blast to listen to, and it's the sort of album that you (or I rather) just want to put on repeat because it's so short and furious. Yes, I would put a caution to those with tempers or those who would play this while around others because you may cause harm to either them or yourself from energetic outbursts while listening to this. Aside from that, play it loud and try not to destroy something while listening to it.
Overall Score: 9
Highlights: God's Cold Hands, Wide Open Wound, Suum Cuique
Posted by maskofgojira at 12:04 PM