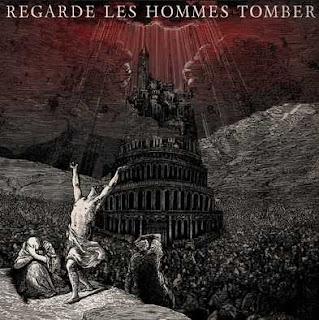 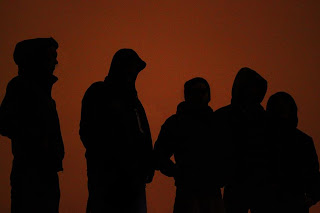 I was not familiar with Regarde Les Hommes Tomber before being sent this album but it was made clear to me that they were a band that mixed sludge and black metal. Good enough for me, I'm sold on that right there. Luckily for me, the fact that a label as interesting as Les Acteurs de l'Ombre Productions actually signs bands that manage to achieve something interesting even if their descriptions don't leave much for imagination.
To say I was surprised by what I heard the band do on here would be an understatement because by saying the band were simply combining black metal and sludge metal (I'm paraphrasing mind you) is like saying, "Morbid Angel, yeah, their early records are like... death metal," it works, but it's not completely accurate. What these guys are doing on this rather stellar debut is take ideas from the aforementioned sludge and black metal genres, but also from post-metal, post-rock, and I would even say a bit of groove metal as well, and craft some rather epic pieces that more than rival their peers in these worlds. I'll say it right now just to get it out of the way, one could definitely say these guys are a "post-black metal" band, but only in the sense that they are actually positioning themselves in places, sonically, that allows them to be a bit more selective in where they want to go. I never thought of groups like Alcest, Deafheaven, or Fen (to name a few) when listening to this album. When I think of simple sludge and black metal, I think of a group like Chicago's own Indian (who do what they do masterfully and are one of the examples of the sound working in all the right ways), but these guys don't go for that sort of approach where they simply hammer you over and over with how heavy they are and then speed up for a black metal section.
While Prelude is actually one of the best "intro" tracks I've heard in a long time, I don't think it prepares you for what comes after it. While it does not immediately follow that introductory track, Ov Flames, Flesh and Sins was the moment where I realized that this band was going above the call of duty and was making some really well crafted and interesting songs. It's the sort of song that really shows the breadth of the band's influences, whether it's the calmer post-rock, the brooding sludge riffs, the intense black metal sections, or whatever, it's the sort of track that made me sit up and take notice on my first listen through. There's nothing wrong with Wanderer of Eternity, but when stacked up against that track, it just doesn't measure up to the same mark. That isn't to say that the album's main punch is that nine-minute piece though, as the four tracks that follow it offer up sides that aren't showcased in that track and are well worth hearing. Those following four tracks definitely do their part by expressing an idea that the other songs don't, whether it's simply being more melodically driven or just showcasing more of that "post" influence the band definitely are aware of how to mix things up on an album.
Overall, I happened to think that this was a really stellar piece of work from a young band who clearly has talent. These guys definitely know how to utilize a variety of influences and put them together in a way that, while not entirely unique, is definitely stylized and well done. I'll be keeping an eye on these guys for a while and I suggest you do the same based off of this recording.
Overall Score: 9
Highlights: Ov Flames, Flesh and Sins, Sweet Thoughts and Visions, A Thousand Years of Servitude
Posted by maskofgojira at 10:23 AM