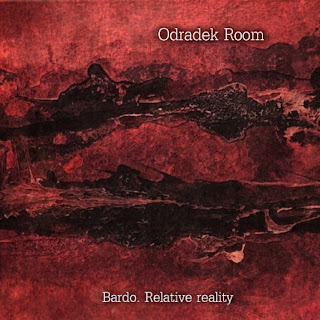 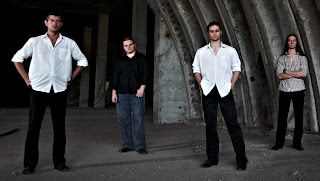 I first found out about Odradek Room some time last year while scouring through different groups on Bandcamp. I never got around to actually listening to the band until now though. I was excited to hear what a band who was labeled as "progressive doom metal" would actually end up sounding like.
The sound of this record is, I think, a bit underdeveloped for me to really say that it's "progressive" but there is definitely some nice ideas on here. What you happen to have on here is a band who is definitely based in the slower spectrum of the metal genres, but aside from the obvious doomier sound, you have them toying around with sounds from post-rock, avant-garde music, death metal, and stuff along those lines. Frankly, at least to me, the majority of this record was spaced somewhere between death-doom and post-metal, and while I can't really call that progressive, I can certainly tell you that what's being done on here, for the most part, is pretty solid. I mean, this band is still pretty young, and their influences still come through pretty clearly in their songs. They have definitely pulled from the likes of My Dying Bride, Paradise Lost, Isis, and Officium Triste (among others). It's not a bad thing, I like all those bands, but there are times where chord progressions sound a bit too much like they were just ripped straight out of one of the above bands and put into place here. Tracks like Inflorescence of Silence or A Painting (Digging Into The Canvas With Oil) do show promise for which the band could further expand upon, it's just a matter of getting rid of those parts that are too much like their influences. Even the post-black metal conclusion to River is a nice shift for the band's sound and is, while hopefully not a huge point, something they can explore further in the future.
I think the biggest thing I could fault this record for would be the production, which is a bit too raw for the sound I think these guys are going for. It sounds very much like a bedroom sounding recording - which is fine in most cases, but this band doesn't sound like a bedroom band. It sounds more like a group who should have a bigger and more weighty sound to their album. The guitars, at least the distorted ones, sound too thin while the vocals sound a bit too loud in the mix. So, the major fault is simply in the recording which I think is the main thing holding the band back from really being something. It's probably just the fact that I'm studying recording that I actually find fault in this to be more impactful for my listening experience. The vocal production is perhaps the weirdest thing to me because the clean vocals, while sounding whispered for the most part, are sitting pretty comfortably in the mix. They don't overwhelm like the growled ones do.
So, overall, it's an impressive debut that definitely shows a band with potential, it's just weighted down by them being a young band - which is nothing time can't solve. Fans of doom metal and all related genres like it will definitely be pleased with this album if they can get past the production. Not bad, but we'll see what the band do next.
Overall Score: 7.5
Highlights: Inflorescence of Silence, Suffocation, Cold Light
Posted by maskofgojira at 11:35 AM