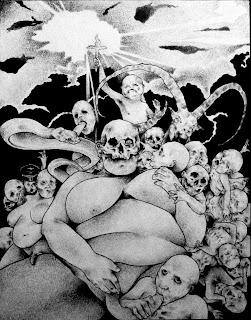 Last year I wrote up a short little review for Sielunvihollinen's first demo Musta Uni, and was pretty impressed with it, though it certainly wasn't without it's flaws. I got an email recently telling me about this new demo that was soon to be released (at the time of me writing this up). Since that original demo showed promise, I decided to check this new one out.
I have to say right off the bat that I enjoyed this demo a lot more than the first. From the fact that I know the project was originally established to have more of a raw black metal sort of sound, this is much more in line with that "sub-genre". The production is a lot noisier and less polished than the first demo was (which was one of my main problems with that demo). Another factor is simply that the songwriting is a lot better on here as well. Despite being labeled as a black metal band, there are riffs on here that made me think of Iron Maiden, Blut Aus Nord, and Megadeth - and there's quite a large margin in between all three of those groups if you didn't already know that. But it's all still rooted under that black metal banner which gives the release a nice consistency. I dug how despite the demo started out in a pretty aggressive and thrashy direction, it slowed down on Viimeinen Valonlähde (which for my money is the best song on here) and managed to make the band seem even better, or at least I think so.
Overall, I dug this new demo. I think it accomplishes everything it needed to - it presents some solid songwriting, the production fits with the "idea" of the music, and the music itself is actually varied enough to allow each track to sound unique in the context of this release. For a demo it's pretty damn good - fans of black metal should give it a listen.
Overall Score: 6
Highlights: Ruttokieli, Viimeinen Valonlähde
Posted by maskofgojira at 9:05 AM