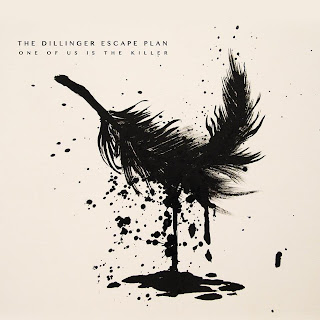 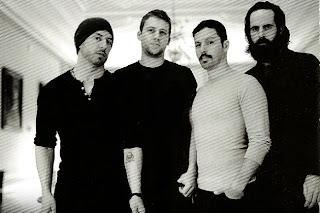 I find it hard not to enjoy what The Dillinger Escape Plan do. Their style is so unique that even when bands attempt to even try a same sort of stylistic venture, they come off nowhere as convincing or even grabbing as these guys are. Plus, they're experimentalists in the truest sense of the word, leading to an even further amount of respect that I give them.
I have to say, the first time I listened to Prancer I was actually sort of surprised by the direction TDEP happened to be taking. Yes, it's certainly as aggressive and intense as anything they've done in the past, but it was perhaps the first time I had noticed how syncopated the band were. The guitar and drum work were really moving as a single unit. Then I heard/saw the video for When I Lost My Bet and was shocked yet again. That track really took me back to the band's Irony Is A Dead Scene EP (more specifically, the song When Good Dogs Do Bad Things) with how chaotic and yet controlled it sounded. With these two tracks providing my introduction to the album, I was interested to see if the band would release their most consistently intense record since 1999 Calculating Infinity, and the one review I read prior to hearing it didn't suggest that my thought was incorrect.
But, yet again, TDEP have managed to surprise me. While the first two tracks are as intense as anything the band have released, the third track, which is the title-track, is right up there with being one of the band's most straightforward and melodic. I've always thought that the band had as much a penchant for writing huge pop hooks as well as their schizophrenic bursts of chaos, but this is right up there with some of their other more pop based tracks. The chorus is just a huge hook. Though the band certainly aren't through tossing you around. Following tracks like Hero of The Soviet Union and Magic That I Held You Prisoner are just as frantic (though a little less spastic) than the opening pair of tracks are. Though it's really tracks like Nothing's Funny and Understanding Decay that shows the progression the band has made since their last full-length. In reigning in their trademark chaos and almost transitioning into a more groove based sound (for the band) you have a sound that is a bit more controlled and one that is perhaps a bit more direct. On Option Paralysis we saw the band fusing the chaos of their mathcore roots with the poppier and more melodic tones that they had been playing with since the release of their debut full-length back in 1999. That record had songs that blended the two styles together seamlessly, this record takes that one step further by making the fusion sound even more cohesive and natural.
As I have always thought, the band do shine when they are experimenting and working within longer song lengths (IE, the songs that are four or more minutes long). Tracks like Paranoia Shields and Crossburner are easily some of their best yet. The former being a nice blend of the melodic and crazy before diving off in it's last two minutes into a more atmospheric form. The latter is a slower paced track that is a nice barnburner (no pun intended) that really shows the band going almost sludge metal for a while. This track also has some nice electronics popping up throughout to really make it worth listening to even if you're not a huge fan of the band doing slower stuff. Though to be fair, neither track is completely devoid of the trademark TDEP frenetic tendencies.
Overall, I dig this record, the band have yet to disappoint me in any fashion. I really dig that the band has actually pushed their sound further by just becoming better songwriters, a change I did not foresee based on the first two tracks to drop from this album. If you're a fan of the band, you'll listen to this regardless of what I say, but if you're not get off your ass and give this one a listen.
Overall Score: 9
Highlights: One of Us Is The Killer, Paranoia Shields, Crossburner
Posted by maskofgojira at 5:25 PM