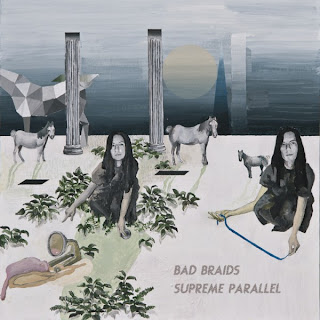 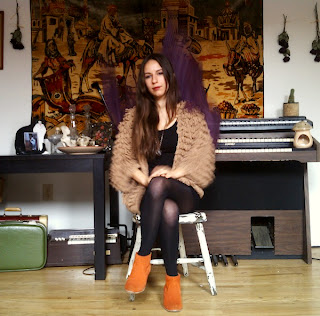 Bad Braids was a project that first came to my attention several years back with it's 2011 Arrow and Orb cassette. That short, little album presented a nice set of sounds and ideas that kept me happy for quite some time, but you (referring to me in this case) always want to see artists evolve. What was I to get on this brand new full-length?
I knew that Megan Biscieglia could write songs based on that original cassette but I guess I didn't expect her to take this project into quite as poppy the direction it apparently has. The eleven songs on here definitely bridge the gap between bedroom singer-songwriter folk music and atmospheric dream pop. Maybe I just haven't listened to the cassette enough times recently but I don't recall hearing as big a dream pop influence on that tape, it struck me as more of a poppy singer-songwriter record. A good record at that, but nowhere near as sort of lyrical as this one. The additional instrumentation on here actually manages to work at giving the songs a character that isn't there solely from Megan's voice, guitar, or organ/piano playing. Whether it happens to be her addition some additional percussion or bringing someone in to add banjo, cello, harp, or theremin it does enhance the listen and bring that extra layer of depth that deserves several listens to grab.
But, at least to me, despite the depth and singer-songwriter approach to the record, this is still a very poppy album. The sound of this record is one that I could definitely see crossing over to a more mainstream audience, or at least a more indie audience. It has that nice balance of pop hooks and reverbed out folk music that I know appeals to that sort of fanbase. Megan's voice is delicate and emotional enough to not alienate those who enjoy the more melancholic side of folk or indie music, but she can still belt out those hooks on tracks like Through The Door or , which, at least in my opinion, are big enough to be hits on the radio if they were given the chance. Forgive me for ranting and believing that this does have potential for being huge, at least in the folk community that is. While her music is nowhere near as eccentric as some of my own personal favorite songwriters (Timber Timbre, Bon Iver), she has that same sort of melancholic tone to her music that at times puts her right in line with them. Honestly I sort of wish there were some more upbeat songs scattered throughout the album instead of right at the front end and then becoming all contemplative and austere for the majority of what follows. But it is what it is and those songs still retain the hooks strong enough to become weighed down by their own melancholy.
This isn't the sort of album I cover everyday so maybe I've come to think of this as "poppy" because of how it sounds in comparison to the average black metal record, but regardless - it's catchy. I mean, a lot of pop music, even in this style, is pretty throwaway because of lack of personality or various other reasons, but I dig this. It's worth looking into if you're a fan of this sort of music.
Overall Score: 8
Highlights: Through The Door, Winter, Another Scene
Posted by maskofgojira at 5:12 AM