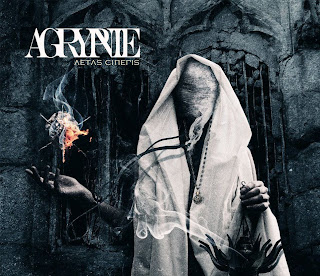 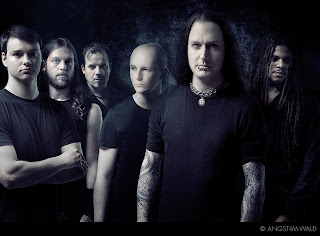 Agrypnie is a band that I really dig. Their previous releases have all really grabbed me and it seems like they are a band who actually embrace trends but never conform or limit themselves because of them. I was even more excited to learn that this album was coming out this year in addition to the new Nocte Obducta album (which also features Torsten Hirsch on vocals).
Sonically, at least in the past, I had always considered Agrypnie to be an industrial tinged black metal band, mainly because that's what various sites had been telling me whenever I looked them up. But with the release of the Asche EP last year, I saw the band doing their own take on the whole post-rock influenced black metal thing. Was it anything groundbreaking? Not really, but it was damn good and the band certainly didn't do what every other band was doing. They fused the general aesthetic and some of the post-rock guitar tones from the genre into their own more riff based sound and boy oh boy if it didn't pay off. That was one of the best EPs of last year, at least in my opinion anyway, and while two songs from that EP have found their way onto this full-length (I'm sorry, but I prefer full-lengths to contain entirely new material) I'm certainly not upset over since the songs were so damn good; and essentially, the sound hear on that EP was the direction the band took on this entire full-length. So atmospheric, riff-heavy, and dynamic black metal is the name of the game here - you bet your ass I was excited.
To me it's appeared that while Hirsch gets out his more progressive and experimental side within Nocte Obducta (for however much he writes in the band I'm not sure) with Agrypnie he writes songs that are much more direct and "rocking." Yes, this is a dynamic record with songs that go up and down, but in nearly every track on here there was at least one riff that made me want to headbang - and like I've said before, black metal with riffs is something that isn't too common. In addition to that each song is around the nine minute mark, give or take a minute or so, which means that lack of dynamics could have killed this record stone dead - but as you should know by now, that was not the case. Even if an entire track, like opener Trümmer/Aetas Cineris, is delivered at a pretty constant state of aggression or that it never shifts out of metal mode, it manages to quiet any qualms I may have with that because the band knows when to slow down and when to speed back up again. But on the other hand you have a track like Zurück which is almost the definition of "post-black metal", so you know that dynamics from hard-to-soft actually occur. Cause if there's one thing all those Alcest copies can do right, it's that they can write a song that at last has a form of dynamics (whether intentional or otherwise). But rest assured that when this band does it, it doesn't come off as anywhere as contrived or forced as many of those bands tend to sound like.
I guess the one "problem" I have with this album is the interlude that is Kosmos [Alpha]. It certainly isn't a bad track, but it's an eight minute ambient track and it just feels to me like it probably could have been about half that length and still accomplished what it needed to do. Aside from that stopgap, the other seven songs on here are all winners in my book. You have more barnburners like the two tracks from the EP, Gnōsis and Erwachen, while other tracks like the two closing pieces, Sinnflut and Asche, are more moody progressive tracks. It's a real rager of an album in my book because you have the more aggressive tracks, you have your moody sections as well as more epic atmospheric ones. You have the great riffs that just make you (or me in this instance) want to headbang. There's variety and dynamics - to which I discussed at great length above as well as really strong songwriting. I understand that the vocals are a bit one-dimensional in some instances but even I can get by that because when they're used they come across as impassioned (as Hirsch's vocals always have to me) and not screamed for the sake of it.
I just really dug the hell out of this record and it's totally awesome. I can't really claim that it's everything I want in a black metal record (since it's more than that), it has a lot of qualities that I think make a great record. I'm glad to see this band continue their streak of killer releases and I hope more people get turned onto the band because of this album.
Overall Score: 9.5
Highlights: Every Track Is A Highlight
Posted by maskofgojira at 9:05 PM