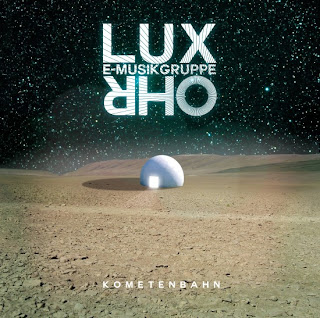 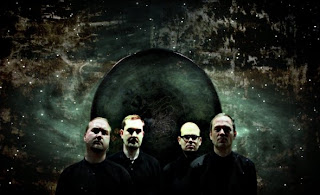 To those who have spoken with me about music, they will know that I am a big fan of 60s and 70s era progressive music. While plenty of people are satisfied enough to simply relegate the sounds of that era to the past, I am always up for retro groups. I was not familiar with E-Musikgruppe Lux Ohr before being sent this album but I was certainly interested.
To be quite honest, when I first started listening to this album, and based off of the genre tags that I had seen the band attached to, I was expecting a far more rocking album than this one. It was probably the "progressive rock" and "space rock" tags that threw me off, because this is pure krautrock through and through. It's that early synth dominated, odyssey-like sound that groups like Kraftwerk and Popol Vuh really helped to pioneer back in the 70s. There's very little use of additional instrumentation besides synth and keys, with the use of guitars coming up very rarely and a drum machine being used in a similarly minimalistic way for most of the time when it's being used. I was definitely thrown off by it because I think what I wanted was more of a rock album and this is much closer to ambient music most of the time than anything resembling rock music. At times it has that sort of early trance vibe that was apparent on early space rock and krautrock releases of that time, which I find to be somewhat of an endearing quality.
Despite my initial reaction towards this album, I have to say that I did actually really enjoy it. I mean, it's not really mind-blowing or anything, but it's very immersive and engaging for the type of album that it is. It's actually quite warm sounding as well, which makes me think that this might have been recorded on analog. Despite a cover that might give the indication of this being rather dark and moody, it's actually quite vibrant and fun to listen to - for how minimal it is actually. Yes, there is plenty of moody ambient work being done on here as well, mainly in the background, listen to the album epic Durch Den Kosmischen Dunst, but the majority of the synth work done on here is quite fun and even upbeat in several spots. I actually have to say that I was surprised by how dynamic several of these tracks proved to be. The aforementioned manages to be it's own little roller-coaster for it's eleven minute running time, with a climax that rivals most post-rock bands. I could seriously get lost in these songs. I found myself spacing out while listening to it (not in a bad way though) and just feeling like I was really being absorbed by the music.
I realize this sort of music isn't for everyone but this album certainly won me over despite knowing essentially nothing about it when I first came in. It's an album that you can sit down and really focus on or one that you can just put on in the background while you're doing other things - and it works great both way. So if you're a fan of synth based instrumental music, maybe give this one a shot. Overall Score: 8
Highlights: Nachtgeist, Durch Den Kosmischen Dunst
Posted by maskofgojira at 12:03 PM