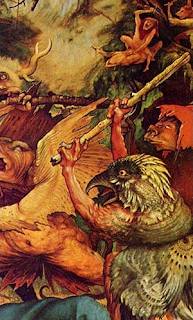 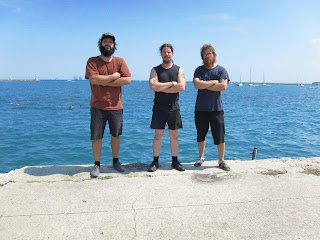 I had been hearing about the band called Terminator 2 long before I ever heard a note of their music and was already sold. Based on the band name alone I was pretty much sold, but obviously there have been plenty of bands who have great names but put out crap music. But since this was being released by Handmade Birds, quality material is expected.
With a name like Terminator 2, I expected something dark, but aside from that I expected the unexpected. Handmade Birds, for better or worse, hasn't released as much "metal" material within the last year and a half-ish as 2011 would have led me to believe, which is fine, but this is definitely a metal band. This three piece definitely takes that very stripped down and heavy approach from sludge while making it a bit more dissonant through the use of electronics instead of guitar. While the bass leads the band, essentially, through low-end grooves, you have this rather well utilized background of noise that makes each song on this cassette feel slightly off center. I say it's well utilized because when I think of bands using electronics instead of another instrument like guitar or keyboards or whatever, the sound I imagine, and the sound I have heard, is one where you have the rhythm section doing their thing, and the electronics blaring over the top, with vocals maybe on top. But electronics are usually just roaring over the top of everything else making it rather difficult to stand for longer periods of time - at least for me. But that isn't the case with this band, as I've stated. Instead electronics tend to remain in the background providing a more warped sense of "atmosphere" that erupts at choice times.
Another point that I harp on a lot about is songwriting, where a band may be creatively interesting and unique but have no sense of songwriting. To those who read enough of these reviews, it'll seem pretty standard fashion by now that me mentioning it means that this band obviously knows how to write a good song - which seemed a bit odd to me seeing how many bands who use electronics tend to go for a more chaotic noise or heavy as balls approach instead of even going for songs. Several of these songs feature some pretty memorable bass lines that are a nice point of entry into the album for those interested. In addition to that the band also take on board the trait that seems to have eluded many a sludge band out there recently which is that they can actually have parts in songs where you can play fast. Tracks like No Teeth and Mathematics are nice grinders that definitely have a punk edge to them which is much needed after the slower pace of the opening few tracks. Closer Mortar and Masons does actually make best use of the band's talents overall. In it's actually justified twelve minutes you have trippy electronic noises, heavy sludge, as well as some well executed sections showing quite a bit of restraint on the band's part. It's all well and good to pound the listener's head in with how heavy you are, but a little quiet makes the loud all the louder.
It's a very solid debut that shows a lot of potential for the future, and I'd be interested to see how the band continue to develop their sound. Honestly it doesn't happen to have a massive amount of replay ability to it, but recently when I've been in the mood for some nice heavy sludge I have turned to this over the funeral doom records I have sitting around waiting to review. It's the sort of record that will definitely appeal to those who happen to dig the slower forms of metal (sludge, doom, drone... maybe) for sure.
Overall Score: 8
Highlights: No Teeth, I Am God, Mortar and Masons
Posted by maskofgojira at 10:50 AM