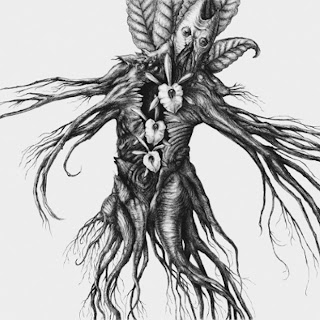 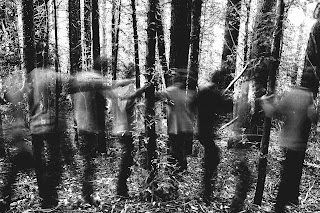 I've been following Botanist since his first release a couple of years ago. From his debut double album to last year's more experimental double album we, as in me and those who listen, have seen a shift in the project's tone and sound. This new album was, surprisingly, short in comparison to his previous releases and was released as an individual album instead of with some sort of accompaniment - whatever that means.
This newest installment in the Botanist's discography surprised me just a bit on that initial listen through. The principle ideas are still the same, you still have a foundation based on wretched vocals, drumming, and hammered dulcimer, but what makes this newest release stand apart from the previous two (three... four?) is in the progressions that these songs make. There's an addition of distortion and/or noise that gives these songs a bit more of a chaotic sort of vibe, in addition to a more dissonant sense of melody exhibited throughout as well. The entire thing reeks of that sort of Deathspell Omega and Blut Aus Nord influence, and I know I say that a lot but I don't find that a bad thing. But perhaps the band that it reminded me of most was a group called The Ash Eaters - if you've heard them. It's an interesting shift from the more melodic ideas of the first release and the doomier side on the last one, though I will say that tempo wise, you won't find as many outright blasters as you might expect. The tempo is a bit more balanced throughout.
To a certain extent I would say that this album does contain some of the project's most accessible material to date, hear To Amass An Army (Mandragora III), though it also contains some of the material that, at least I found to be it's most difficult to get into as well, Nourishing The Fetus (Mandragora IV). It's sort of a mixed bag in that regard because sometimes you'll get into a groove with the drums while you have these more dissonant chords being played over top but it works, while other times, obviously, you'll get into a section where it sounds like complete chaos (but in a good way). A couple of times during those more intense bursts it did make me think of some more post-hardcore bands, though that may just be me. I have to say, while the debut was something I found I could just put on in the car and really enjoy it, and the follow-up was more of something I would put on when I was relaxing or doing other work, I have yet to find a good place to listen to this. That's not a bad thing, but I found that this one was a bit more taxing to listen to and found myself a bit worn out after it had finished. The entire Mandragora "saga" (which is the first five tracks on the album for those not aware) is probably the most interesting collection of songs that the Botanist has ever put together simply because of those reasons though. It shifts from being almost immediate and accessible in one track to being completely off-putting and dissonant with the next. The formula isn't original but it works well because the tracks never feel the need to overwhelm you with a single idea (this song is completely chaotic while the next is all melodic). Despite being divided into five pieces, it does feel a bit more like a collective song so I never got the feeling that this was simply five separate songs (even if that might have been the original intention).
I dug this album, I not sure it'll stay with me quite as long as the previous full-lengths simply because of how some of the tracks manifested themselves, but it's an enjoyable, and surprisingly short, listen. Despite how polarizing the project has been up til this point, this might just be it's most polarizing album yet. It's not for everyone, and if you haven't gotten over the fact that this isn't a gimmick yet, this album won't convince you, but if you're looking for some interesting post-hardcore/chaotic black metal-ish and nothing has satisfied your thirst, do yourself a favor and look for this album.
Overall Score: 8.5
Highlights: Nightshade (Mandragora II), Mandrake Legion (Mandragora V), Rhyncholaelia Glauca
Posted by maskofgojira at 5:05 PM