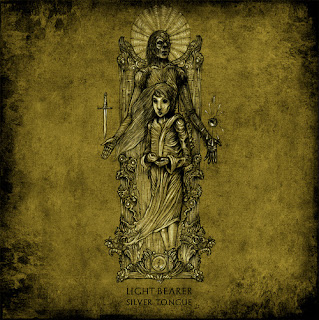 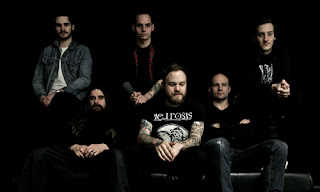 Light Bearer has been a rather interesting independent group who has proven to be quite prolific in the years since their inception. The style in which they have chosen to perform in has bred groups who often tend to take much longer spaces of absence in between releases, which is not the case with this group. Since the talk around this record has sort of died down since it was released several months back, I figured it was about time to bring it up again.
On 2011's Lapsus, I really dug what the band was doing with their brand of post-metal and sludge metal. They took that rather tired and somewhat lazy sound that so many bands had done up til that point and really gave it a nice breath of fresh air. Granted, it wasn't a huge breath, but that record had life, it was diverse, and it felt passionate. It didn't feel like as much of an exercise to listen to a band write a song that was soft and then got heavy during a climax. I'm certainly not immune to that style of writing but it gets taxing after a while listening to a style where no one is doing anything original with it. Then the band released a single and a split with Earthless (which I still hold as being one of the best splits to come out that year) with an epic twenty-one minute long song. It was another nice take on their sound, pushing it to it's limit, at least at that time, by stretching the song out to that length and still making it engaging. I had high hopes for this release coming into it.
That last statement is probably making whoever is reading this think that I'm now going to trash this album, but that is actually not the case with this record, or at least not the entire case. Unlike their first couple of releases, this record suffers most simply from overreaching. The band really put too much filler on here. There are certainly some good tracks on here, the opening and closing pieces on here are great pieces of work actually, and some of the stuff in the middle is quite good too, but this album has six tracks and five of them are over ten minutes. Normally that isn't a problem for me, I like long songs, but some of these in the middle just felt like the band didn't really do anything in that time. There was no reason Aggressor & Usurper should have been almost seventeen minutes long, it easily could have been about half that length and accomplished about the same. I single this track out simply because during the handful of times I've sat through this entire album (from start to finish) this was the track where I found myself nodding off to the most. By that point in the album I feel as though I've already listened to the band's best track to date, the opener, Beautiful Is This Burden, and then some other stuff which is solid for the most part. But at that point in the album I just feel tired out and worn down by the album. I don't feel like an album should wear down a listener simply because of how long it is, maybe with how heavy it is, but not it's length. So I can't help but take against this album because of how long it is.
I don't know if I've mentioned this in any of my reviews for the band's other material but I really dig their production. It's nice and raw sounding, not really polished, but very bassy. The band's music doesn't really come across as "heavy" to me in the traditional sense, but more as "weighty". It feels like there's actual power being used to play some of these more distorted sections, which I'm all for. In a way it sort of reminds me of Neurosis because they've really lessened their more metallic side but have retained the weighty sound of the style without falling into it. To be fair though, Light Bearer is definitely still a metal band. It also compliments the more atmospheric tones that the strings bring when they come into the mix. It doesn't have a drastic shift in tone even if the band are playing a more upbeat and melodic part before transitioning into a more melancholic string section.
So, this album is filled with some of the band's best material yet, but paired along with some of it's most dull as well. It's simply a matter of overreaching, which I can't take against a band for, I can only hope the band can tone things down a little bit more for their next album. I think that if you're a fan of slower forms of metal, you'll dig this for sure, otherwise, give the opener and closer a listen before making a final decision to advance further.
Overall Score: 7.5
Highlights: Beautiful Is This Burden, Silver Tongue
Posted by maskofgojira at 12:28 PM