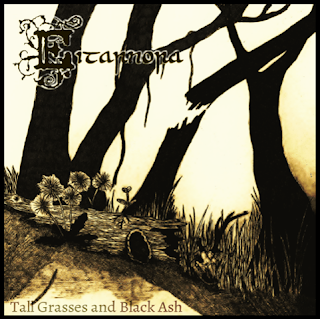 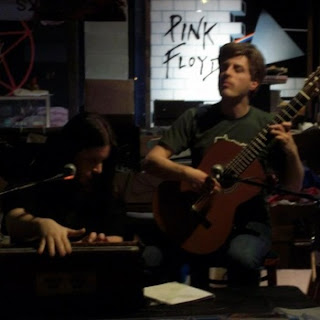 Good friend in Eitarnora there is for me. This two man trippy folk act has been releasing releases(...) pretty consistently for the last couple of years now and this is the most recent (excluding the live album) of their albums to hit my collection. What more is there to say than this is the other side of the morbidity that is Venowl.
For all the praises I sung of Eitarnora's previous release, 2012's Murmurations, I have to say that this one quite easily tops it. While this release isn't any more song oriented or features a sound that is radically different from the previous albums and EPs, what this new full-length does have in it's favor is a far more ambient tone that (at least to me) did not appear to be as prevalent on earlier albums. I hesitate to say this, but several tracks on here have an almost new age quality to them. The droning harmonium chords being used alongside Val Door's emotional, but restrained, falsetto cries and Jon Rosenthal's quiet guitar phrases leads to quite the enchanting piece of music. The gentle percussive instruments that occasionally pop up in certain tracks only enhance the meditative quality this album has. It's ambient, but without all the negative connotations one tends to associate with that style of music. It's melancholic but also full of light and "hope" - think of a sunset. It's subdued but full of life. A true contradiction packed into five songs.
But the ambient quality is just one dimension (if that doesn't sound overly pretentious) of the duo's sound on this album. For the first time, that at least I can recall hearing, the band have channeled some neo-folk ideas into their sound as well, hear Plains Dance, which is an absolutely beautiful piece of music. The violin swells are simply perfect, and I don't hesitate to use that word in reference to this section of the song. Actually, the swells on nearly every song is well done. It never feels like a huge serge or increase is happening but a gradual and slow elevation of sorts. In addition to that, there are a couple of flares of country on here as well, or at least that's how my brain interpreted it. I'm not going to even begin to describe how each style is different on here (mainly because there are people who could do a far better job of such a task than I ever could); but I'll just say that the ideas used on here, whether it be country, folk, ambient, or whatever, works better than I imagined it would. Perhaps my favorite track on here would have to be the closer (big surprise there) Reciting, which is truly a lovely lullaby of a song. Despite no song on here being anywhere near to what could be described as "intense", this track in particular is so gentle and well paced that it just feels like something you could put on to lull a child to sleep (and I mean that in a good way). There wasn't a time I was listening to this song where I didn't get goosebumps at some point. I can only hope that others manage to find one of these tracks as moving as I found this one in particular.
I really dug this album, obviously, and it far surpassed my expectations for it. The duo of Eitarnora have definitely taken a huge leap forward with this release with my only complaint being that there were a few spots where the recording did have a few blips and fuzzes. Aside from that, this is a pretty amazing folk(...) record that I would recommend to everyone interested in the acoustic music.
Overall Score: 9.5
Highlights: Every Track Is A Highlight
Posted by maskofgojira at 10:11 AM