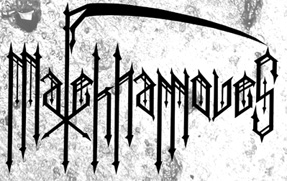 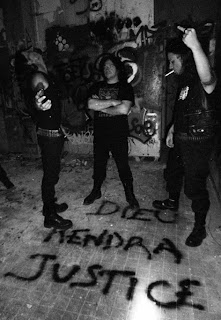 When I was sent this three song cassette from Gospels of Death Records, I wasn't really sure what exactly I was getting. From the other albums I had been sent by the company doing PR for this tape, I expected more of a black metal band. After listening to this, I realized not to judge a young band by their PR company.
For a group that is as young as this, one must realize that the band is likely to have not polished these songs as of yet. The two songs, plus intro, are raw, scuzzy, and very primal sounding death metal (not black metal as I had first thought) which means you can pretty much gather, more or less, what they sound like. Granted, this is not modern sounding death metal, if that makes it easier to guess than good. There is no Job For A Cowboy, Black Dahlia Murder, or other bands of that ilk sounding parts on here, it's pretty much late 80s and early 90s sounding stuff. So there's definitely some Celtic Frost worship going on in here as well as some love shown to groups like Asphyx and Pestilence as well. It's not reinventing the wheel sort of stuff, but it's nice to hear from a younger group who appear to have actually listened to a death metal record made before the turn of the new millennium. But to go back to the whole polish thing for a second, obviously these songs do not feel seamlessly crafted. It's more like the band put together a bunch of parts and said, "That's a song." It's an approach that, to a certain extent, I do find endearing, but hopefully they can improve this on future releases. If I did have to voice a complaint, it would have to be at the vocals which, when they're actually being growled are just fine - nothing great, but it's death metal. What I have a problem with is the weird sections where spoken word is used or when someone in the band can actually be heard laughing. It's just a head scratcher as to why those were left in.
So, in the end, it's a solid tape, though I do wish there was more material. Two songs and an intro is a bit short, even for an EP of this nature, but it is what it is I guess. Probably not for people who think death metal should be polished and trigger and overly compressed, but if you dig that early stuff that sounds like it was buried in the backyard before you actually listened to it, then this is worth investing some money in at some point.
Overall Score: 7
Highlights: Le Trône
Posted by maskofgojira at 11:07 AM