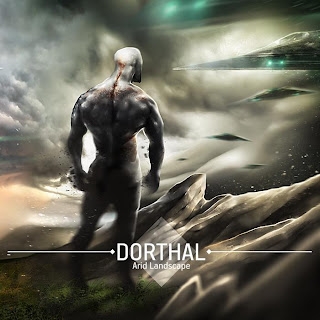 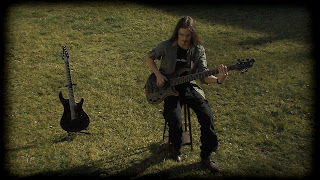 My opinion towards djent has always been pretty slanted because I like a lot of bands from the genre, so I guess I'm more willing to five some people a break when I find an artist that I like. There are a lot of bands and projects that do it in a way that is just boring and uninspired. Dorthal, despite not caring initially, turned out not to be one of those projects.
Djent is a hard style to make work, despite what people may think. Hammering on your lowest strings may put you as a part of this expanding sub-genre of metal, but it doesn't mean you're a good songwriter. It's hard enough to get a band with a vocalist who can actually do something interesting over music like this, instrumental groups, can just produce some very sad work. I've found my patience towards the genre running a bit thin as of late, and I have had very little patience within the last year or so with instrumental groups because no matter how well you can chug or shred, once you've heard Animals As Leaders do it, I have found little reason to continue listening, no matter how talented the group happens to be. Dorthal has been one of the few instrumental djent based groups to actually impress me. Despite being very groove based, main-man Clément Reviriego is very talented and can write. Not only are the grooves he comes up with rather well done, but he also has a grasp ambiance and length. None of his songs are all that long, he has several parts in a song, and he doesn't overreach for longer lengths. I also admire how much of a presence he puts on bass in his work, being very clearly audible in most of his work and coming through just as strong, if not stronger, than the guitar work.
This full-length really surprised me because as much as I really dug what Reviriego did on his last EP, Cell Regeneration, it was still pretty much a djent release, this album definitely goes beyond that sound and ventures into some old-school jazz fusion territory. As I just stated above, I have always admired his bass work, but on here it really gets put to some good use. Perhaps more so than almost any other band to emerge from this sub-genre, the fusion elements come through loud and clear. The addition of Cyril Prevost on saxophone has not only amped up those influences, but there appears to be a lessening of the whole "metallic" edge to the project - of which I have no problem with incidentally. I bring that up because on the three previous EPs, those more jazzy sections were always used and contained within a more metallic frame, whereas on here they are a bit freer and are allowed to roam out of that frame. Tracks like Outer-Space Lost Shrine and Grove Finally Grown Through The Emptiness of This Place definitely rank among the best material he's written thus far as well as being some of the most unique to emerge from this genre in quite some time. There are extended sequences on this record where sax and bass dominate of guitar, though as I've stated before, the bass has always had a much larger presence in here than in many other projects. Yes, you still have that mechanical djent to keep things groovy and heavy, but during those sections where guitar is not dominating, it tends to fall into clean work that is more atmospheric or used for accenting than playing a major role. Maybe it's just me, but I thought that that was a pretty cool little trick. I guess my only real gripe with this record is the addition of vocalist Rémy Pocquet on the track Verdure. It's not so much a problem, but I just didn't think he added anything to the song that the instrumental version didn't already contain.
Overall, a really great debut full-length that definitely lives up to the promise of those three EPs which came before it. Reviriego is a musician who definitely holds a great deal of talent for songwriting and utilizes it in a way that separates him from the many other one-man, instrumental, progressive metal groups which now litter the internet. I hope he continues to keep evolving in however he chooses, because both his metal excursions and his more jazzy phases have proved to be a force to be reckoned with.
Overall Score: 9
Highlights: This Gigantic Skeleton, Illusion of An Oasis, Grove Finally Grown Through The Emptiness of This Place
Posted by maskofgojira at 9:34 AM