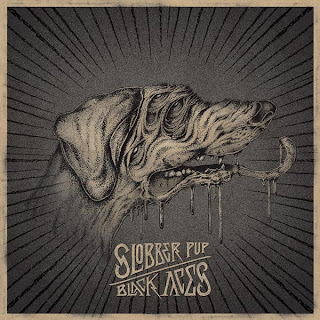 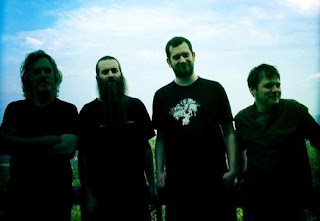 My first experience with this record was one in which I had no idea what it was, I just pressed play and read the press release for it later. As of lately, Rarenoise has been releasing some pretty stellar albums and I don't even remember replying for a copy of this one - it just showed up one day. So knowing only that Rarenoise was releasing it, I released the pressure of my finger on the play button and let myself be open to whatever I was about to hear.
Based off of my experience with what Rarenoise has released, I was sort of expecting a more straight-up jazz album, which this turned out not to be. Featuring the likes of keyboardist Jamie Saft, drummer Balazs Pandi, guitarist Joe Morris, and bassist Trevor Dunn (of whom I am a big fan) this album really just grabbed me by the balls and refused to let go. For a band made up of guys who primarily come from a jazz background this was surprisingly rocking, and at times even metallic. When I actually read the press release it didn't really come as a big surprise upon reading that some of these guys had played with John Zorn before, what with the rather chaotic nature this album manages to present. Opener Accuser is really something grand though. This twenty-seven minute long introduction to the album is really a kick in the balls, probably the biggest kick in the balls I've ever had from a "jazz" record to be honest. This thing blasts off and doesn't really ever relent in it's fury and intensity. The guitar work is frantic yet controlled within a blues sort of style. The bass lines are distorted a fuzzed out to the point of being hard to make out at certain times. The organ and keyboard work is droning and manages to create a sort of space for which the other instruments are confined within so as to not come across as random instrumental wankery. But the biggest grabbed was the drum work which just blew me away. Pandi's work on this track is just insane, he keeps things very controlled, even with the organ keeping things together, he reigns them in and then throws them back out. It's crazy! I swear, the first half of this opener is more intense than many death metal songs I've heard.
While the rest of the album never achieves the same level of sheer intensity as the opener does, it does bring a bit more of that jazz flair to the table. With the exception of the righteous blues jam that is Basalt, the rest of the album channels both the aggression and the frenetic nature of jazz's more outer reaches. The three tracks that then follow continue to challenge with the fusion of jazz, metal, and prog-rock. While the title-track is a spastic freakout of sorts that features some rather crazy keyboard lines taking the lead for the better part of the song, Suffrage is a much more contained sort of piece that really brings that 60s and 70s psychedelia to my mind. The bluesy guitar lines and smooth rhythm work by both Dunn and Pandi were what grabbed me most about this track in particular. With organ lines that definitely hammer home that retro sound. Closer Taint of Satan brings us back to a more contained sound, though one that is definitely heavier and focused more on achieving that metallic sound than the title-track. I mean, by the end of the track, everyone seems to just be going crazy on their instruments, organ lines flying past you, drum work that borders on death metal style intensity, and bass and guitar work that just turns into a wall of distortion. Personally, I really dug how the closer just descended into utter chaos, but I know it won't be for everyone.
So, Rarenoise release another killer album that just knocked me out. I certainly did not expect this in any way and despite not knowing a single thing about the project before listening to it for the first time, I was left sorely beaten and bruised by this. Definitely a must for all fans of experimental jazz, prog-rock, or even those metal and rock fans who are looking for something a bit different.
Overall Score: 9
Highlights: Accuser, Suffrage
Posted by maskofgojira at 2:04 PM