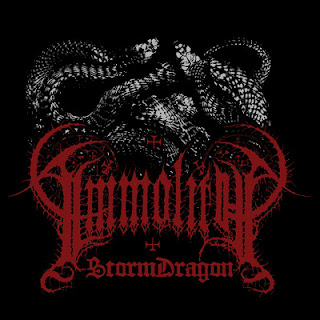 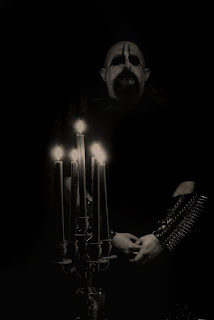 For all my love of experimental, weird, and progressive forms of music, sometimes I just need a good smack to the face for a reality check. As we all know (or should know), black metal didn't start being weird until the late 90s, before that we had brutality and atmosphere. I don't always need a super original album, I just need a kvlt album.
Even just looking at the cover of this album, it's pretty obvious what you're going to get yourself into. I honestly don't blame anyone who says they're more into experimental black metal and, I guess, less "extreme" forms of the genre, I certainly have my own prejudices and preferences in the genre, but there's something about unbridled brutality that appeals to me. Granted, I always advocate variety, and I always will, so I do like songs to vary in some form or another as well. When it comes to the whole "trve" and "kvlt" albums, which I don't think I cover all that often actually, I guess you could say I'm a bit more picky than when I see the tags of experimental, post-, progressive, etc. because of prior experiences. Don't get me wrong, I love the early work of bands like Mayhem, Darkthrone, and Ulver, to name a few, but I've been burned by the likes of bands similar to Dark Funeral. I just can't handle an album full of songs that essentially are just blast-beats, tremolo picked riffs, and Satanic vocalizations, I understand the appeal, I just never got into that band. Luckily, this was not the case with Immolith.
When listening to this album, it is certainly a very true to form style of black metal, most of the riffing is tremolo picked, the vocals are throaty wretches, and the drums pound along, but it's not monotonous. The use of all-out brutality and unbridled aggression (in the form of blast-beat driven songs) is kept to a minimum on here. Most of the songs, while more than certainly black, have the sort of vibe where you can still hear the influences from thrash and even death metal in it. There's also bit of an old-school doom influence on a couple of these tracks as well, namely The Ghost Tower of Inverness, which I happened to think was a nice touch. I don't know if saying that an album has traces of these other genres makes you think of it as less kvlt or not, it does allow this album to flow better and seem less like a single song that is just stretched across eight tracks (in this album's case). These songs also tend to make it pretty apparent that even when they are blasting forward, that what's on top of them, the riffs, are actually worth listening to and remembering. I'm not going to say that all of them are great, but they're more than certainly a lot better than a lot of other groups who just tremolo pick over the blasting, and provide nothing worth remembering at all.
In a case like this one, I really don't need a whole lot of originality, if the songs are good, I'm perfectly ok if the album/band plays their sound pretty by the books. I love riffs and I love good songs and I love variety, this album has those things and it's what makes it a good album. It's not going to change the game of black metal, but if you happen to enjoy more straightforward black metal this is must for this year.
Overall Score: 8
Highlights: Storm Dragon, The Ghost Tower of Inverness, A Pact of Blood
Posted by maskofgojira at 11:23 PM