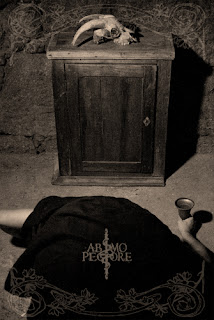 When it comes to black metal demos, there are really two different breeds that you can get. There are those that are extremely raw and are pretty strict to the traditional sound of the genre, and while there's nothing really wrong with that per se, I find those to be a bit dull. Then you have demos that, while the production may not be the best, the music is more interesting than your standard kvlt one-man bedroom band.
As many people who read this site will already know, I love my black metal (metal in general really) weird and so when I put this on for the first time I got something I did not expect at all. Since this is the first release from this band, obviously I had never heard of them before getting this and based on the cover I kind of expected it to be either more of a traditional sort of black metal record, or it would be a more ritualistic kind of record, ala Echtra or Reverorum Ib Malacht. What is on these six tracks is a far more, let's say avant-garde, experience that is far more interesting than anything I was expecting. This is the sort of band that makes use of all those weird, dissonant, and jazzy riffs that call back to the likes of Ved Buens Ende and Blut Aus Nord and that's the sort of stuff I just love. With all that being said though, it's a very well recorded release, that honestly sounds better than quite a number of albums that I've heard in recent years. It's clear but there's still a very mystical atmosphere that encompasses these songs, which come from both the weird instrumentation as well as keyboards and synth effects.
It's the type of demo I'm glad I listened to because I don't hear a whole lot of demos that impress me, I most likely will never post about the ones I hate, but this is a very good one. Definitely for all the weirdoes and psychedelics out there who love black metal with a twist. If you haven't listened to this yet, definitely look into it, I doubt you'll hear something as interesting as this from a demo this year.
Overall Score: 6
Highlights: Mothers of Mothers, Sulphur Garden
Posted by maskofgojira at 1:32 AM