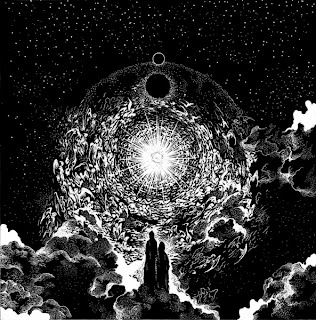 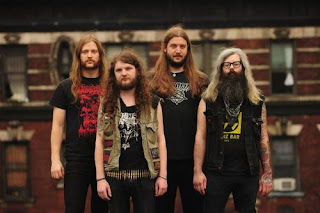 Thanks to the nice review my friend Jon wrote for the quartet known as Mutilation Rites' last EP, I decided to check out this new full-length they're putting out. I was wondering to see what had people praising the band about and that only added to my interest. New York City black metal, what could be wrong with that?
Right from second one onwards, this thing just blazed by. Just intense and straightforward black metal done with a sort of punk attitude (no, I'm not saying because Pitchfork said it), and that really drew me in. Straightforward black metal is all fine and good but personally, I always find it more appealing when a band has something else going for it, whether it's the fact that they can throw in the occasional odd influence from folk or doom, or whether it's an attitude that can just be felt from the music. Screw all things kvlt and necro, I dig the whole punk edge on these songs. The thrash vibe is also nice to hear as well, but it doesn't feel as tiring as thrash makes me feel, because unlike punk, after listening to a thrash album for longer than thirty or so minutes, I get bored with it real fast, and that didn't happen with this, though the entire album isn't even forty minutes total. Punk is the attitude, thrashy are the riffs.
I tend to harp on dynamics and diversity a lot in my reviews, along with production, so I guess I should start in with what I think of them on here. For production, despite how old-school I think these guys are trying to sound, the production is not super necro and raw. Granted, it's not super cleanly polished either, but it feels very real and live, like the band are actually playing in front of you (but with a bit more clarity), which I thought really worked for the sound they're going for. I think that a more modern sounding production might have weakened the attutude they have from coming through. As for dynamics and diversity, the band are good, but certainly still have room to grow. I think that, for the six songs on here, they do a good job at making each song flow naturally without trying to cram in as many riffs as possible. A song like Ancient Bloodoath works for its seven minutes because they break up the black metal sections with a more doomy bridge, or for others they might bring out the punk side a bit more. The doomy side is used a little more frequently on the second half of the album, which I actually preferred, which helped to provide a much needed break from the all-out slaughter-fest that were the faster moments. So dynamics are certainly well utilized though diversity is still a little weak in my opinion. For an album that's only around thirty-five minutes, the band can certainly pull off making most songs fast and aggressive without deterring too much from that, but I think that if they ever decide to release a longer album, they'll definitely have to include some more diversity into their songs. I'm not going to hold that against them too much though because the album is so short.
It's a solid debut full-length that works for what it is and nothing really more than that. I think the band has achieved what they wanted to with this release and it's a record that I'll definitely revisit when I want to hear a more pummeling form of black metal, but I can't see it being an album that I come back too all that often. It's solid, check it out if you're into more straightforward black metal, even old-school fans will probably dig this as well.
Overall Score: 7
Highlights: A Season of Grey Rain, Dead Years
Posted by maskofgojira at 9:40 AM