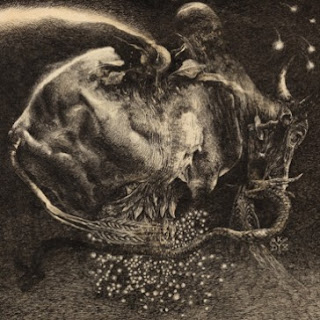 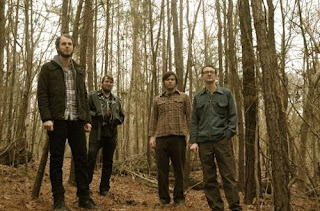 I have it on good authority to call Horseback, or really Jenks Miller, one of America's shining stars in the world of underground metal. His work in Horseback is constantly pushing boundaries into realms of the unexpected and totally brain-boggling, and I have become absolutely smitten with his work. Since I've started reviewing albums, I can say that my anticipation towards releases has weighed, I can say that this is/was one of the few albums being released this year that I have been anxious to hear before anything else.
Despite all the good word coming out about this record from all sources, to simply rely on that as grounds to say that this album is inherently amazing and jaw-dropping would not only be a terrible way to go about covering this album, but it do a total disservice to the music and hard work put into it. Having said that, I was reliably informed from people whose opinions actually matter to me that this was either their favorite album of this year thus far, or one of their favorites. So, that, along with my own excitement towards finally getting to hear this, build the expectations up quite high for this album; and I can say with certainty that it did not let me down in any way. Sure, I certainly didn't expect all the turns that this record would take and all the stylistic ground that would be covered, even from other reviews, but, in a way, it's better that the way I sort of envisioned them sounding in my head was totally different than what's actually on here.
I mean, I was aware that this was supposed to be a sort of companion to 2009's The Invisible Mountain, so I guess you could say that I was able to kind of figure out the sound of tracks like Mithras, Ahriman, and Arjuna because they aren't too far off of the ideas that were present on that last record. The whole americana-meets-blackened psyche rock sound isn't that different, though it is by far more textured and layered on here. It's on these tracks that I believe Jenks Miller has really stretched the boundaries of psychedelic rock, though the entire album could be seen that way for psychedelic music in general anyway, but for these three tracks he really just crafts these minimal sort of ideas and stretch them into songs that are far and away some of the most captivating I've heard since The Invisible Mountain. The entire performance of these songs is simply hypnotic and really makes you wonder why throughout all the years of progressive and psyche rock, and going into metal, more bands haven't been able to craft songs as interesting, memorable, or trance inducing. Tracks like Inheritance (The Changeling) and Hallucigenia I: Hermetic Gifts, on the other hand, see Miller really achieving levels of mind-warping noise and drone that rivals the likes of Merzbow (at his more intense) and Skullflower.
We cannot simply call this another record though. Unlike how every previous release under the Horseback name has offered a very different personification of the project/band, this new one can be seen as the first time all the elements have come together completely. The raging black metal, the krautrock inflected psychedelic rock, the droning post-rock, blistering noise, and various others have finally unified into a conjunctive unit. Much like how the closing trilogy, Hallucigenia, is a Middle-Cambrian creature named for its dream-like qualities which have lead to many discussions as to even if it is a living creature, or just an appendage from another. With scientists arguing over which end is actually the head of it, one could see it as the perfect metaphor for this album. With so many stylistic ventures under the Horseback name, there is no defining sound that one could find in every recording, as the project is always shifting. Also, as Jenks has referenced in many interviews, this album is also meant to represent alchemic transformation and evolution, both of which can be seen in the album's shifting sounds. Much as this album is what follows after the end of The Invisible Mountain, the closing of this album could lead to further transformations. As the ouroboros eats its own tail, it will continue to exist, constantly recreating itself. Horseback will continue to evolve and change with each release, but as of right now, this is the definitive one.
After all of that, I don't think it's a secret that I love this album. It is truly one of those albums that just moves you in a different way each and every time you listen to it. If the dozens of other reviews praising this album haven't swayed you to check it out already, do it now, you are obviously missing something special and who knows when something like this will happen again.
Overall Score: 9.5
Highlights: Every Song Is A Highlight
Posted by maskofgojira at 3:32 AM