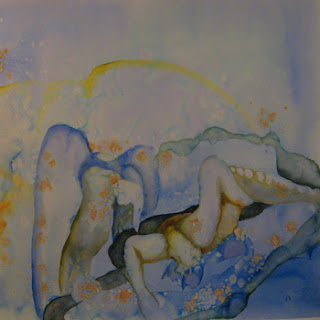 It really wasn't that long ago that I covered Sujo's last EP, Terran, but he's already had this little release out for a while at this point. Sure, I'm a bit late covering it, but to release another album within this time span is pretty impressive. I was certainly impressed with the EP, but this full-length came with a little note that told me it was more influenced by the likes of Darkthrone, which certainly got my attention.
After an intense burst of noise that introduces the record, Sujo breaks into the sound fans will certainly recognize. Much like his last EP, the fusion of drone, noise, post-rock, and black metal are all intertwining and weaving into and out of each other within each track. The sound is absolutely huge sounding with a grandiose kind of atmosphere that wasn't nearly as well developed as it was on that previous EP. It also retains a similar sense of flow as all seven tracks flow into one another seamlessly. If you're a fan of Sujo's previous work, this one doesn't differ too much from the style that's been crafted up to now. Both feature a very Nadja-esque approach towards ambiance, which I really enjoy, but may prove to be a bit difficult to overcome if you're not a fan of that sort of take on heavy music.
But, this is not just a copy of the last EP with a few modifications. Like the statement that came with the disc said, it has more of a black metal sort of influence to it than before, and that's definitely noticeable. Sure, you'll still get your sections that dominated more or less by harsh noise and industrial drones, but the presence of tremolo picked guitars and noticeable percussion than before. There's a certain relatability in sound to the whole post-rock influenced black metal sound, not so much blackgaze, because in my opinion because this is much more interesting and has influences that are less obvious than the now typical Alcest or Amesoeurs. Having said that, it might be the sort of sound that might surprise those who come in thinking that this is going to sound like another post-rock influence black metal project, because the drone and noise and industrial ideas are far more up-front than any other band I've heard attempt this style. The ideas are not so clear cut to where a random metal head could just pick out the black metal part from the drone part; but like I said above, there are segments where the line is a lot more obvious than others. There are plenty of calmer moments that are more post-rock and ambient like, though the atmosphere from both can be found throughout the entire record in various degrees obviously, but the record doesn't really get intense, to me, and it isn't until tracks like Threat or Landing pop up in the second half of the record, where the atmospherics are just monstrous in stature and the drumming just breaks off into almost free-jazz territory.
I think this is a great piece of work honestly, and it stands that in a world where it seems like every new black metal band wants to suddenly embrace post-rock and shoegaze in order to gain some sort of notoriety, there are a few who can still make that influence sound real and interesting. What's on here isn't contrived in an attempt to break out into the metal mainstream (or less underground world, I guess that'd be more fitting), but a very unique fusion of ideas that is carefully being honed to perfection. I think Sujo is a really good project and that if you're into more experimental forms of black metal, post-rock, drone, noise, etc. this should really be looked into.
Overall Score: 8.5
Highlights: Famir, Diaspora
Posted by maskofgojira at 10:18 AM