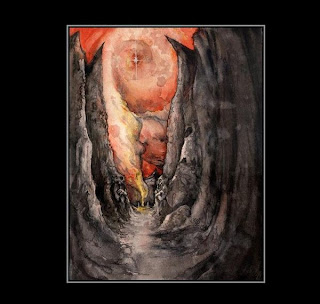 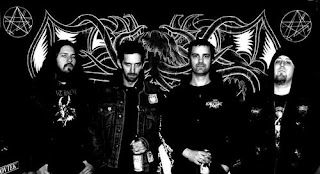 I can honestly say that I was not familiar with Aldebaran before hearing of their signing to Profound Lore. Apparently the band's brand of sludgy doom, or doomy sludge, was quite well thought of in some groups, but I guess I just missed it. This new album does have the band moving more into the realms of funeral doom, which has apparently garnered some mixed reactions thus far.
Before even hearing this record, I had seen a couple of lines in some other reviews and in the press leading up to this album's release that kind of put the idea into my head that this album was going to be an epic record. I don't remember specifically, but I can recall seeing something that said that this album was essentially one hour-plus long track, which immediately kind of caught my attention because that seemed a little surprising that Profound Lore would be releasing a record like that. Sure, they've been putting out quite a lot of doom records as of recently and they have that Evoken record coming out in a few months as well, but the label never really seemed like the type that would put out a band that would just have one song on a record. Not that it's a new idea for funeral doom, but it's just an idea that seemed a bit surprising to me at the time. Having seen the track list for this album since then and listened to this album, I understand what the label was going for. Instead of a single song, the album divides that one song, essentially, into five separate parts.
If you were like me and you saw that track list you'd probably be thinking, "Oh, well that'd certainly make the album a bit easier to digest," and you'd be wrong like I was. Despite being split into five tracks, three of them act as an intro, interlude, and outro, with the two other tracks acting as "real" tracks. That wouldn't be so bad if the "real" tracks in question weren't both over twenty minutes long, with the second one almost hitting thirty. Honestly, the length shouldn't bother me as much as it does, coming into this record, I knew it was a doom record, I later found out it'd be funeral doom, but that only reinforces the idea of long songs, so it's not like I didn't already know there was going to be long tracks, at the time, track, but it's like, when I want to listen to funeral doom, this is just not doing it for me. It's not bad, mind you, I've certainly heard a whole lot worse, but this just doesn't feel anywhere near unique enough to keep my attention for the extended periods that it needs to for these tracks to have their full effect. It just feels average, it doesn't have the majestic songwriting of a group like Mournful Congregation or Omit, it doesn't embrace more outside influences like post-rock for example like Ahab or Esoteric, and it doesn't have that cathedral sense of epicness (cathedral the church, not the band, just to clarify) like Skepticism or Ea. In comparison to groups like those, it's like, why would I need to listen to something like this which just sounds like a first attempt at this sort of style for the band.
Maybe I'm being overly critical of this album and just need to take it as a whole new experience. Having never heard any of the band's previous recordings, which I've been told are actually pretty good for sludgy doom metal, but it's like, after I've heard this, I have almost no interest in hearing them do that. This is average funeral doom that is overly long, a bit boring in spots, and not all that impacting when it all ends; and so it doesn't really inspire me to go out and have any desire to listen to their older material. I don't think I'm asking for too much when I say that when I listen to a funeral doom record, I would like to remember something about it other than, it was really slow. Honestly, this thing isn't all that heavy either, there are plenty of other bands that wield more weight with their guitars than this. I'm sure that if these guys continue down this path they'll get better, but this was just too standard for me to really find a whole lot to love about it.
Like I said above, this isn't a bad album, it's just really, really average. I'm sure if you happen to love the genre or are some newbie who's never heard a whole lot of it you might enjoy this record, but this just did nothing for me. It's the sort of record that I doubt I'll be coming back to any time soon for pleasure's sake.
Overall Score: 7
Highlights: Forever In The Dream of Death, Occultation of Ocular Tauri
Posted by maskofgojira at 12:43 PM