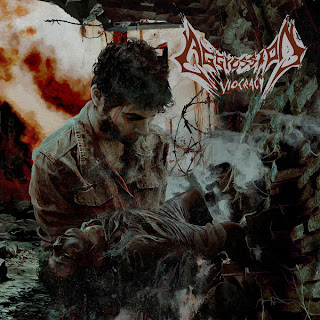 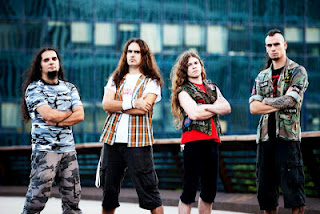 I've said it a lot but I figure for reiteration's sake I'll do it again and say that I'm not a big fan of thrash metal. I just can't get into most of it, sorry if it's a little unfair to call it too unoriginal most of the time but I like to hear variety among bands, not the same band from twenty/thirty years ago being played, essentially, covers by a new band. Knowing all of this, I still decided to give this band a shot.
In my opinion, while genres like black and doom metal have evolved since their inceptions, even death metal has, I really haven't seen thrash evolve beyond maybe grindcore, but at this point, a lot of grind bands don't even reference thrash. It's remained a genre that, to me, hasn't gotten any better with age and remains a genre where I'd much rather just listen to the classics than anything new that's coming out. Honestly, I probably wouldn't have covered this if I didn't see it tagged with the label of "technical thrash", which caught my attention. Not that that tag has ever caught my attention before, but I took a shot and listened to a song before deciding to check out the rest of the album' and I was pleasantly surprised by what I heard. What came out of my speakers from opener False Flags, which was the song I checked out to see if I wanted to hear more of this album, wasn't so much a rip-off of 80's Exodus, Metallica, and Slayer, as much as a modern, and updated, mixture of thrash, early death metal, and a little bit of fusion. If I was to compare these guys to any other band, I'd say they're closer to what Atheist was doing early on in their career. Sure, you'll still hear riffs that are more likely to come from the influence of bands like the ones listed above, but the songs are far more interesting and don't sound as predictable. In my opinion, even the vocalist sounds a bit like Kelly Shaefer, only a little bit cleaner.
One of the only reasons I return to the any thrash metal albums at all is because the riffs are good. Like good thrash records and bands should provide, this record has got riffs. I'm sure some might not dig this as much as a record from bands like Warbringer or Evile because these guys tend to change a riff up more often than either of those bands do, or really most modern thrash "revival" bands to be honest, and maybe that's why I enjoy this record more so. These guys also know how to craft some solid hooks as well, tracks like MK Ultra and Human Nature definitely stood out not only due to having some pretty solid riffs but also because the choruses were instantly memorable. Most of the tracks, despite shifting their riffs and throwing in the weird riff every now and then, are fairly straightforward and still deliver most songs in a pretty standard intro-verse-chorus-verse format. The only track that threw me off was closer, Victims of Bias, which is a strange instrumental track that embraces the likes of jazz-fusion and blues rock into its structure. None of the sections are performed badly at all, but it just seemed a bit strange to throw in those sort of sections into the album closer. Personally, I would have loved to have heard more of those ideas thrown into the rest of the album, but maybe next time.
I'm not going to claim that this is the most unique or even interesting band out there, or even that the ideas on here haven't been done before, but these guys are talented and know how to write good songs and riffs, which is more than I can say for their peers. I don't cover thrash all that often because a lot of it is just recycled, this has personality and more, I'd recommend this over a hell of other thrash records that get way more hype. If you happen to enjoy thrash metal, definitely check this out, it's probably one of the only new thrash albums I've enjoyed in a good while.
Overall Score: 8
Highlights: False Flags, MK Ultra, Human Nature
Posted by maskofgojira at 2:23 AM