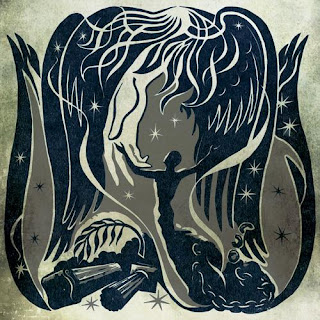 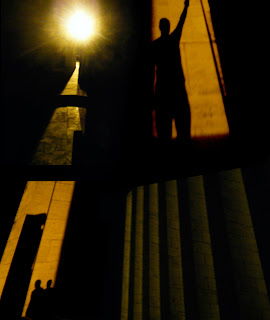 Despite this album being out for a little while, I haven't really heard, or seen, too much press done for it. I know it's a pretty underground debut release, but still, I'd thought that it'd be a record that at least some would be doing press for it. I've had it for a little while already, but now I'm ready to finally do my part and, hopefully, spread the message.
This sort of album really makes me think of early atmospheric black metal, but in a good way. Off the top of my head, I can't recall any Austrian black metal groups, but this one definitely brings me back to hearing groups like Lunar Aurora (in their mid-period), Ulver, and Emperor for the first time years ago. There will be those who listen to this album and link it to the whole post-black metal movement even though, to my ears, besides the wall of sound style that's used on here, and the occasional clean vocal part, this doesn't really recall the likes of post-rock or shoegaze all that often, if at all. I think that because the atmosphere on here is so dense and pervasive will have it liked to that style, even though it honestly recalls more of the bands I just mentioned. A Dream of Ghosts was the track that really made me think that others would be able to lump the project into that style because it does have a more moody feel to it and does kind of have a similar sort of ambiance to it that I think could be found in a group like Altar of Plagues or Fen. It's a rather intense record, though I wouldn't say that it ever became monotonous, that relies of tremolo picked riffs and harsh screams and moans, but still manages to make use of melody and dynamics. Not every track on here blasts throughout its entire length, to the extent that I found myself rather impressed with the range of tempos used on here while still making the whole thing feel like an aggressive record. A Pathway to Rebirth is probably the best example of the variety used on here as it moves from blackgaze-ish mid-tempo beginnings into more epic sort of territory in its middle before closing with some intense, if rather straightforward, black metal blasts.
Probably my biggest complaint about this album would have to be the drum programming. It's not bad at all, but there are times when I found it to be rather irksome. There were certain patterns played/programmed that I found to sound too robotic sounding and it didn't match the overall vibe of the record at all. It's a little disappointing because the pattern I'm referencing happens to be in the opening title-track, which isn't a bad song, but based on my distaste for the programmed pattern, it led me to believe that this album would have at least a few other sections that featured a similar kind of mechanical sound. That wasn't the case though. The way these tracks are programmed is actually really good and it fits the music. Aside from that, there really isn't a whole lot more I found to be wrong with the album. I enjoyed the occasional uplifting sounding melody injected into these songs and thought that it provided a nice contrast to the more intense and traditional sounding parts, though I'm sure some will disagree. I just happen to think that this record gets better every time I listen to it.
I think it's a good debut that various factions of the black metal realm should really take note of. Coming into it not really expecting too much, I really thought that this was a nice listen that was nice and quick, and has yet to become boring after several listens. If you like old-school atmospheric black metal or if you happen to enjoy some blackgaze or post-rock influenced black metal that just so happens to feature a bit more of an edge to it, this is the sort of record that you'll probably love.
Overall Score: 8.5
Highlights: Hymns of Ruin, The Secret Revealed
Posted by maskofgojira at 7:36 PM