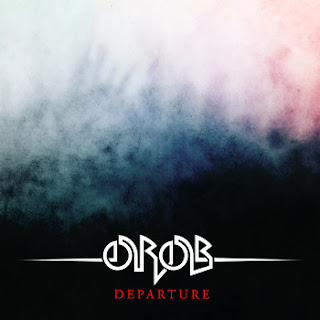 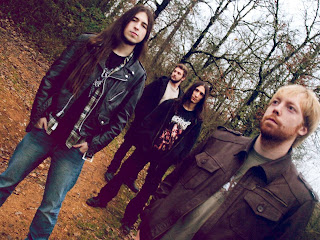 I rather enjoy scouring the web in search of new bands to listen to, maybe it's more of a job now than a hobby, but nevertheless, I find it enjoyable. I always welcome finding a new band with a sense of joy because there's always that chance that I could get blown away by what I'm hearing. It was only recently that I found the quartet called Orob, and I was most certainly interested once I pressed play.
Having listened to quite a bit of black metal from France in the last couple of years, and being quite a big fan of the country's output, it's hard to really expect something from a new band, except for maybe quality anyway. The four songs, and an intro, on here definitely show a band that is not trying to go for a popularized sound, and having been witness to the rise of blackgaze and post-rock influenced black metal in the last couple of years, it's nice to find a new band not trying to capitalize on that. It's still pretty apparent where some of the band's influences lie though, with traces of Opeth, Emperor, and early Dark Tranquillity, though I wouldn't say these guys are at the level of any of those bands yet. So with those sort of influences popping out, at least to me anyway, it leads to a pretty diverse batch of songs that run the gambit from more straightforward black metal kind parts to much more adventurous atmospheric sections. To a certain extent, the sound demonstrated on here reminded me of the sophomore album, Mantra, from Norway's In Vain. They both retain a very riff driven sound that keeps the ideas rooted in their more extreme roots while sort of dipping their foot into more progressive pools. It really isn't until the closer, Of Shores and The Wind, where the band really show more of their prog-edge.
As a debut release, I think it's quite interesting and one that's certainly worth hearing. There's certainly still room to grow and expand into a more unique and consistent sound, but for what it is, it's well done. If you're a fan of progressive tinged forms of extreme metal, definitely seek this out, I do not think you'll be disappointed.
Overall Score: 7
Highlights: Departure, Of Shores and The Wind
Posted by maskofgojira at 1:00 AM