I actually hadn't heard material from any of these groups except EUS before listening to these splits before. (Remember that splits are graded from 1-8) 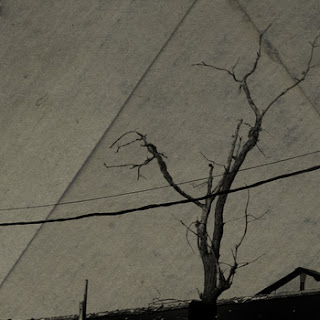 Having only heard EUS before deciding to cover this split, and honestly having a rather luke-warm reaction to his last album, I was really sure how this release was going to play out. Despite holding six tracks, they all blend into a single piece that really runs the gambit of ideas, though being able to tell when one track begins and another ends is a difficult task into and of itself. Unlike the more ambient album I covered last year, the ideas spread across this piece are far more noisy and, while I guess you could still call it dark ambient music, is a much more intense kind of experience. While it's still quite a cold affair, the layers of noise, which at one point even manage to recall a bit of black metal, add a bit of warmth to this/these track(s). Mytrip dwells within the realms of more in the realms of isolated dark ambient music though. I'm honestly not sure what to say about it because it really doesn't do much that you wouldn't expect from ambient music. Personally, I didn't really find it anywhere near as engaging as EUS' material and it just sort of droned on for most of the time. It really isn't until the last track, From A Distance, that I really found myself interested in what was happening. The droning, more industrial ideas present in this last track were far more interesting to listen to and, despite the whole thing feeling rather mechanical, which very well may have been the point, was enjoyable.
Overall Score: 6.5
Highlights: Menester Dos, Menester Cinco, From A Distance 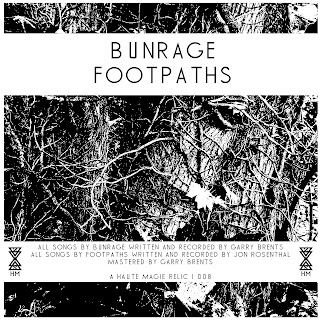 Coming from two artists who I respected already for their other projects, this split really interested me because I hadn't heard material from either of these before. Starting with Bunrage, we have a weird mix of IDM, hip-hop, and almost post-rock, at times. Gary Brents is known for his more metallic projects, but I'd call one of his signatures to be that post-rock influence, because in every one of them that I've heard, he manages to inject that smooth and beautiful ambiance into them, and on here, while I won't say it's as prevalent as some of his other projects, it's still there. While about half the tracks on here are under two minutes, which kind of leads some tracks to feel a little undeveloped, the ones that manage to cross that mark are much more engaging and open sounding. Jon Rosenthal's Footpaths' project takes the opposite approach. Instead of the electronic, beat based sound of Bunrage, what you get is a more trippy, droning type of psychedelic folk which, in my opinion, isn't so much about songs as much as it is about painting a picture in your head, and that's where these two projects are similar. Now, I haven't been to any of the places these tracks are named after, but each one does certainly build an area in your head while you're listening to them. The airy and rather lo-fi quality to these songs lends them to falling into the background at times, but rather than being a flaw, I actually saw that as a benefit because it allowed the cycling patterns to repeat enough so that when your attention was brought back to the track, it might sound like a completely different piece of music Sonically, they're pretty far away from each other, but they both create soundscapes where you can almost see another world around you while listening.
Overall Score: 7.5
Highlights: Menu, The Opposite Happens Now, Winter Harbor, ME 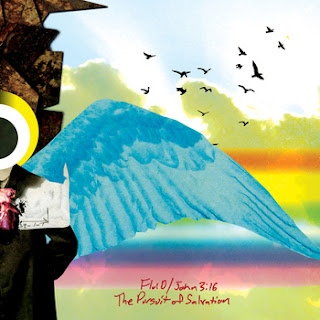 Of all three of these splits, this was the one that I had no prior information about prior to listening to it. Christophe Gilmore, who's going under the name FluiD for this release, provides the first half. What you end up getting is an odd sort of industrial ambient style of soundscaping. However, because these soundscapes are short, it doesn't get repetitive or boring. Each track kind of provides a nice and interesting idea for a few minutes before moving onto the next track. Then we have John 3:16 who, while sonically take a similar approach, ultimately provide a more "active" style. The ideas present move more, there's a bit more in the way of progression on a track, not just a series of ideas, and more attention to build-ups and climaxes. Both tracks contributed are interesting and attention grabbing pieces that, while I wouldn't say they ever get loud, retain a lot of industrial, and I'd even say post-rock to a certain degree, elements that move the songs forward, which, ultimately, leads these two tracks to being the best on here.
Overall Score: 7
Highlights: Plague, God Is Light
Posted by maskofgojira at 2:35 AM