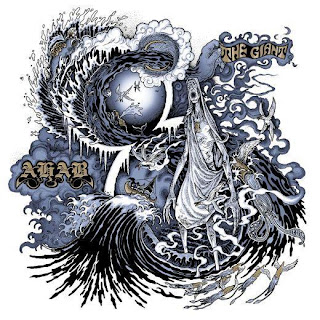 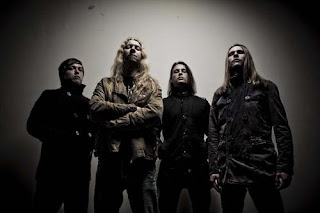 I've mentioned my dad in a couple of reviews before and how he's the one who helped me get into power, prog, and trad. metal groups when I was younger, but believe it or not, he was the one who turned me onto Ahab, if memory serves. He's in no way a funeral doom fan, but because the band was signed to Napalm, I think he checked them out and told me about them. Since then, which I believe was just around the time that The Divinity of Oceans was coming out, I've been a fan.
I guess it's worth stating right off the bat that to me, Ahab's debut full-length, The Call of The Wretched Sea, is one of the best funeral doom albums to have been released in the last decade. I'm not going to say that it was a totally unique or super original sounding album but the songs on that album and the way the band harnessed the funeral doom sound, created an album that stands head and shoulders above a good ninety percent of other funeral doom releases from the last decade. In addition to that, the concept that they were using on that album, which has obviously translated to both this new album and 2009's The Divinity of Oceans, was perfect for that album, or the sound was perfect for the concept, whichever you prefer. Now, on that 2009 album, the band definitely introduced more melancholic clean passages into their songs, which helped the dynamics of their sound, but some of the songs didn't really stand out as much as others on it. Up until maybe a month before I got this album, I had no idea the band was working on an album, so I wasn't really sure what to expect when I first put it on.
Once I found out about this record, I looked around a little bit to see what was being said about it, either from the record label or from people who had maybe heard snippets of songs or a full song and it seemed like a lot of people were on their toes. People weren't sure how this album was going to wind up being because the band was embracing a whole lot more post-rock than ever before into their style. Make no mistake that the band certainly still have their extremely heavy and crushing metal passages, but that post-rock influence has really bled all over their sound. Even during those heavy parts, the air of melancholy still remains like salt in the air while drifting among the seas. I mean, unlike other funeral doom, really doom in general, bands out there, Ahab are one of the few who can make music as monolithic as their music. Despite being more melancholic and not quite as heavy, their songs always manage to reflect the overwhelming power of the ocean. There's also been a significant decrease in the amount of growling vocals on here, which may or may not please fans, but personally, while I wouldn't say that I miss their presence, I do think that some of the clean vocals, when they're not done by Herbrand Larsen of Enslaved, maybe could have used a little more work. As the album progresses, so do the clean vocals, but album opener Further South just sounds really odd, vocally, because it just sounds like Daniel Droste kind of forgot what he was supposed to sing and so he kind of just mumbled. Maybe I'm exaggerating just a bit for dramatic effect, but they seriously sound weird compared to the rest of the sung vocals on the album.
I know that there are some who are quite disappointed by the route the band has taken on this record, but honestly, they pretty much released a classic album for the genre with their first full-length so why try and repeat themselves. It's still heavy, slow, and powerful so I don't have a whole lot of qualms with it. I think the band do a very admirable job on here delivering something that is a bit different while still retaining their own sense of individuality. I realize that funeral doom is a genre that really hasn't given birth to the most creative of bands but these guys are going out on a limb and trying something a little different while not abandoning what they founded the band on doing musically.
I suggest that you do check this album out for yourself, because of how divided this has apparently been received thus far, I would say that you should rely on your own ears for this. Personally, I really like the path the band have taken on here, the dynamics are just great and it contains some of the band's best work to date. I wish more doom bands would go out on a limb and take a chance like this, but then again, not every doom band is Ahab.
Overall Score: 8.5
Highlights: Aeons Elapse, The Giant
Posted by maskofgojira at 9:26 PM