I know some people might not like the fact that I'm just lumping these three albums together into a single review but two of these are a couple months old at this point so I just think it's easier to cover them this way at this point. Besides the fact that all three are, essentially, within the same style. (All three reviewed from 1-10) When I look at the career of Psycroptic, I see the sort of evolution that I only wish more bands would have. While their first few full-lengths where they were basically playing tech-death that wasn't so dissimilar to that of any other band playing that sort of style, ever since vocalist Jason Peppiatt joined the band back in 2005, each recording has progressively gotten better. In the three albums (including this one) since he's joined, the band have shifted their style from that of more traditional tech-death to something that resembles the likes of tech-thrash, similar to the likes of early Atheist. While 2008's Ob(servant) still boasted quite a large death metal sound, most of what's found on here is closer to that of thrash, call it deathrash if you want. Peppiatt rarely makes use of his guttural lows or higher screams on here, sticking with a more intense style of shouting (once again, more akin to thrash, or even crossover), and while I realize that that may not be for everyone, I actually think that he does a great job. Now, I don't care what anyone says, guitarist Joe Haley not only has chops, but he's a guy who knows how to write a good riff and that can be heard in nearly every song on here. I don't tend to listen to a whole lot of music that is riff-based anymore, despite how much I do enjoy those bands, but it's totally refreshing to hear an album that just has a ton of riffs that just get stuck in your head. This is just a good, riff-based album, and I don't tend to review a lot of albums like this, but I'm glad I did and you should definitely check it out as well if you haven't already.
Overall Score: 8.5
Highlights: Carriers of The Plague, The Throne of Kings, The Sleepers Have Awoken 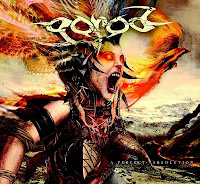 Much like Psycroptic above, Gorod has been evolving with each album into a beast that has roots in traditional tech-death but has grown into something far more original and unique. Though, in my opinion, the band have always been above average in their specific genre, what with them actually managing to write a riff that stays with you longer than the duration of that specific song and whatnot, it was on 2009's Process of A New Decline where I feel like they found their stride and then branched out on last year's Transcendence EP, experimenting with and pushing their sound into much more jazzy directions. This new album really takes those two releases and combines them. While this is still very much a tech-death album, I would have to say that the band's songwriting has never been better. Tracks like Elements and Spirit and 5000 At The Funeral are among the best material the band has ever written, with the latter bringing in more of that jazz influence and the former just being a well written piece of tech-death. The band have also embraced a bit more space on here than before, I mean, it's not a lot of space, but it's noticeable enough to see that they're will to go out on a limb and actually give a song groove. While the band never really did the whole "brutal death metal" thing on any of their releases (even their debut wasn't really too much in that vein), I certainly appreciated the deviation into it that appears on The Axe of God, which isn't totally unique to this album, but is none the less useful in providing variety in their songwriting. It's also worthy of note that vocalist Julien Deyres displays far greater variety in his vocals than Guillaume Martinot did. While the majority of vocals are growled, he veers out into Gojira-esque yells and even clean vocals on a few occasions. In the end, I just think that this is a top-notch album that is definitely worth checking out.
Overall Score: 9
Highlights: Elements and Spirit, 5000 At The Funeral, Carved In The Wind 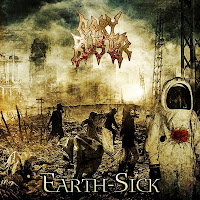 Will someone please tell me what happened to Gory Blister. I'm serious because this is not the same band that released albums like Skymorphosis and Graveyard of Angels. When I listen to this album, it is nowhere near as unique as those previous records were. While the band have always been technical, previous releases had a sections where more space was granted which allowed some riffs to open up and made the songs more interesting. Aside from a few songs on here, most songs felt like standard tech-death songs, fast and intense with flurries of notes flying at you all at once, but nothing really sticks. Now don't get me wrong, I'm not saying that this album is bad simply because of that, because I enjoy plenty of tech-death, but I tend to enjoy records like that when a riff or two manages to stick out to me, and that doesn't happen all that often on here, at least in comparison to the two records I mentioned above. I can certainly appreciate the symphonic influence that comes in on Dominant Genethics, the more varied vocal performance on H.I.V. (which reminded me a bit of Carcass actually, and that's always a good thing in my book), and the really melodic guitar lines that pump up the title-track, but there just isn't enough cohesion between songs, in terms of experimentation, that holds them together. Do they sound good when they're happening, for sure, but after that track ends all I was left with was asking myself why that idea was used only in that one spot and nowhere else is it really referenced on the rest of the album. In the end, there were very few tracks on here that wound up sticking with me, sorry to say.
Overall Score: 6.5
Highlights: Earth-Sick, H.I.V., Serpent Verse
Posted by maskofgojira at 5:31 PM