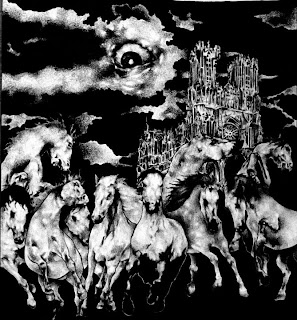 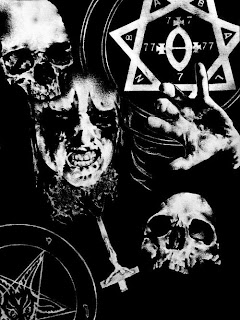 I consider myself a rather lucky guy, over the past two years, I've been able to meet and talk to some very, very cool and talented people, but one of the first was Lord Theynian of Dødkvlt. Ever since his first record, titled I, he's been pumping out some killer black metal. This, his third album picks up, conceptually from where his split with Goats of Doom, Deathcult ov Doomgoat, from last year left off.
When listening through the Dødkvlt discography, it becomes aware that despite any growth that happens musically, each new release does have its own variation on the project's core sound. While that core sound may contain elements of melodic black metal, symphonic black metal, and old-school thrash, each new release presents a new take on that sound. On this album Lord Theynian has obviously been listening to and decided to embrace more progressive influences because not only are these some of the longest tracks the project has written yet, they're some of the most interesting. Honestly, I have to say that I was never the biggest fan of straightforward melodic black metal, or symphonic black metal for that matter, to begin with, but Lord Theynian has a way of has always made a point to never makes the symphonic parts too over the top or cheesy or the melodic parts too obvious. This album continues that in a positive light, advancing the melodic parts into more interesting ones and allowing the symphonic parts to feel less like they're tying the project to a genre that has long passed it's expiration date. Though, I can't not mention the similarities in the symphonic parts to the Clint Mansell score for Requiem For A Dream. There's an obvious point of reference taken from the main theme of that film, but it is a different piece in the end.
I have to say that for a progressive album, there is still a very high level of melodic ideas present, for a black metal record anyway; but I mean that in the sense that the melodies are bigger, feel more pronounced, rather than it simply being melodic. Both A Curse Upon This Wretched World and As I Descend Into The Bottomless Void feature guitar harmonies that bring back fond memories of when melodic death metal wasn't a genre that was so commonly associated with metalcore. The type of melodic sense that doesn't make you think, "Oh, well any band could've written and pulled that off," because, despite some good bands still emerging from the melo-death genre, a lot of them don't have this sort of sense in melody, and you could apply that to melodic black metal as well. Their melodies that not only bring fond memories, but sound absolutely epic on the latter track I mentioned above. Despite all that, I prefer it when Theynian takes the project into more progressive realms, which despite the length of these tracks, doesn't really happen until about mid-way through, not that that's meant as a complaint on my part, just a comment. Whether it's the dissonant intensity that appears in Enlightenment or the slower approach taken on Final Seal Broken, I appreciate those sort of steps being included into the project even if they're not overly huge in scope.
Now, I've been a supporter of this project since its first album was released back in 2010, so maybe it's because my tastes may have changed and I have different preferences, but I do have a couple of things that have changed my perspective on the project a little bit. Listening to this album, and the project's last full-length, the production is just a little to clean for my taste now. I kind of wish there was a little bit more grit and bite to this album because sometimes it can come off a little sterile sounding for black metal. I'm aware that the album was meant to have a clear and defined sound, but I don't think that a little more roughness would have hurt these recordings. I also have to say that opener Dark Void Architect could have used another take or two for the vocals. They're not bad per se, but they definite sound strained, especially compared to later tracks on the album, and wind up sounding like Theynian is trying his hardest to do a Kvarforth impression.
This is certainly the most I've enjoyed a Dødkvlt record and it does improve with each listen through. It's not perfect, and while some of the previous recording have lost a bit of their luster in listening to them recently, this one has yet to feel redundant after several run-throughs. I can honestly say that this is the most consistent and well-rounded album the project has released to date and it'll be interesting to see where Theynian decides to take the project next.
Overall Score: 9
Highlights: As I Descend Into The Bottomless Void, Final Seal Broken
Posted by maskofgojira at 5:19 AM