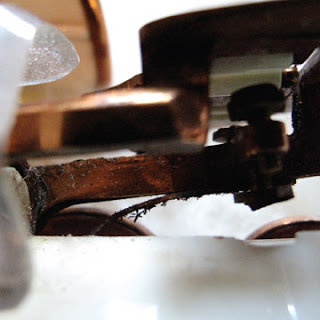 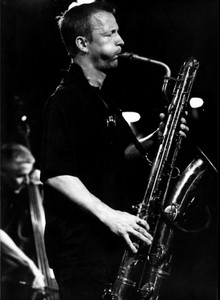 I guess when it comes to the whole jazz style, this is perhaps the realm I feel, more or less, comfortable in. When the music is totally devoid of anything resembling an actual song and is basically an exercise in self-indulgence, and patience for the listener. Having said that, it's not like I spend my evenings listening to the likes of John Zorn or Evan Parker for kicks.
Free jazz is something that I can only describe as mood music, since it really isn't something that I'd call everyday music. I mean, in the pantheon of free jazz and avant-garde jazz, as whatever other sub-genres and sub-cultures of the genre you want to throw in there as well, there are obviously those who are more listenable than others; but, even knowing, essentially, what this record was going to be, and seeing as I didn't listen to any of the clips that Utech posted on their site for it, I was coming into this somewhat fearful. After a handful of live improvisation records from John Zorn, which kind of tainted the whole genre for me for a long time, anything attached to the world of free jazz instantly makes me slightly turn. The incessant squawking that permeated those recordings was enough to turn me off of Zorn's recordings for a long time.
But talking about this record, having never heard any of Gustafsson's previous recordings, all I can say is that this is far more tolerable and listenable than any free jazz album I've heard in recent years. Sure, if you're coming into this expecting to find anything resembling a melody, you'll be looking for a long while before you find anything even close to something accessible. But far be it from me from saying this isn't interesting. I mean, depending on how you view the whole free jazz thing, maybe you find the entire genre to be a point of interest, but in a style full of misses and not many hits (from my experiences with it) I found the two lengthy pieces on here to be interesting enough to hold my attention. The use of techniques on here that range from the absurd to the simply mind-melding is enough to keep even the most ADD person captivated for at least a little while. Moving from frantic squawking to ambient-ish breathing, and everything in between, is certainly an interesting experiment.
I'm not even going to pretend to know how else to talk about this record or the theory or motives behind it. This really isn't the sort of record that I usually talk about because, as someone who is a real novice when it comes to theory, the entire idea of an album being based on it really just sounds more like an exercise to me, and one that sounds frankly boring. For everything that went into this, it's certainly commendable and I do respect Gustafsson for it, but like I said above, I don't see this being anything more than a mood album for me.
Overall Score: 7.5
Highlights: Side B
Posted by maskofgojira at 5:28 PM