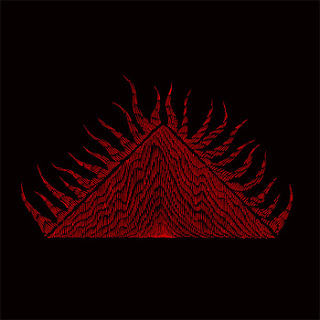 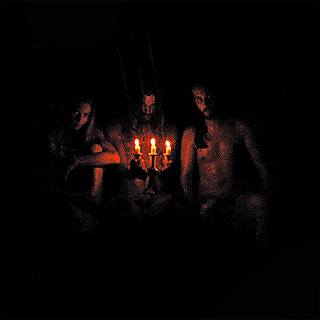 Within the last decade, the use of guitar in metal has become less prominent than it once was. As my good friend Jon had mentioned in one of his reviews, doom metal was meant to be played on the guitar since it was first created, but more and more groups are esquing that instrument all together and performing the genre even better than those who make use of it. Horse Latitudes' debut full-length last year made quite a few people take notice in the underground, and this year I was interested in what all the fuss was about.
You know, when listening back to this band's first album, Gathering, I didn't really get into why it was so hyped when it was released. Not to say that that was a bad album or anything, but it really didn't do a whole lot that I haven't heard before. Sure, the trio is made up of two bassists and a drummer/vocalist, but the songs on that album didn't really do much for me. In general, the whole thing just sort of droned on a little too long for myself. So I was quite nervous the first time I listened to this album because of how indifferent I felt towards their first full-length. I was really hoping that the band had evolved or grown in some way that would make them more interesting. Preparation, the intro song, pretty much let me know right off the bat that the band had definitely developed their sound further, and so that gave me hope that the rest of the album would show a similar form of growth.
I have to say right away that while I love long and epic songs, the fact that the trio have actually learned how to reign in their songs, I think, is actually an improvement. The three tracks that follow the intro are all under eight minutes, and they are actually some of the best songs on here. These songs don't feel like pieces that just drag on and on and on, to which some people might actually enjoy, but feel more like actual songs. They pulled back on the extended jam sessions (or drone sessions) and decided to just put together a handful of tracks that are enjoyable to just bob your head along to over and over again. The likes of Dissolution or Profane Awakening are essentially doom metal songs, nothing more, nothing less, just they're damn good doom metal songs if I ever heard one. Even the vocals have become more enjoyable, and actually remind me a little bit of Messiah Marcolin (of Candlemass fame) and A. Nemtheanga (of Primordial) at times, which is always a welcome thing to hear. But, and you probably saw this one coming, these guys are a drone metal band as well. Obviously they're not going to forget that aspect of their sound, and they certainly bring it into the forefront at the halfway mark on here. Riffing begins to fall away in favor of bleak and haunting atmospherics, leaving only the noise and feedback from the sustained notes and chords to remind you that there are in fact bassists in this band, hear Decline of The Ages for an example. The closing track, Along The Circles, is probably the best mix of the two ideas I've heard in a good while because it has both droning moments as well as straightforward doom passages.
It's a solid release and I certainly like it more than their first full-length, but the band has yet to really wow me with one of their releases. It's just one of those things that I kind of wish was a little bit more off-kilter to fit with the psychedelic vibe I feel this group has during some of these tracks. If you're into drone doom, or straight-up doom, I think you'll really enjoy this album, it's a pretty solid mix of both. Overall Score: 7.5
Highlights: Profane Awakening, Into The Deep
Posted by maskofgojira at 11:28 PM