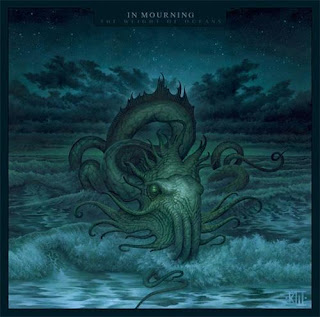 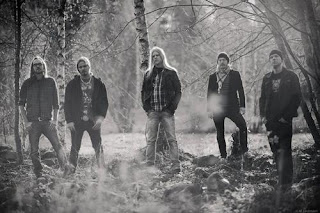 I'm sure by now everyone's heard of In Mourning thanks to the very positive coverage of this album, but I too would like to throw my hat into the circle of these opinions. I remember actually enjoying their 2010 album Monolith, which for some reason I guess a lot of people have come to think is just alright or so-so, but whatever. When I saw this album was coming out, and it's cover, I was giving it some major expectations.
I guess for myself, In Mourning have been a band that have always kind of drifted along the edge of being a progressive band while still retaining roots from their more gothic metal and melo-death background. Each record, even their debut full-length for that matter, has always had those progressive elements, but it's still quite hard to really call them a prog band. Sure, they have the right influences coming in from the likes of Opeth, Katatonia, and Meshuggah, but I guess it's been their lack of real adventure that's always kind had me lump them in with the more melodic crowd. They have those mellow parts interspersed with the heavier bits, and they have songs that are purely soft and atmospheric, but it's like, in the last decade, almost every band has been doing that. While their last record hinted at greatness, there were still quite a few things that held it back for me from becoming a great record. That's where this record comes in. I have to say that this album opens fantastically, both Colossus and A Vow to Conquer The Oceans are fantastic songs that contain everything that I thought the band could be if they finally blended the right elements of progressive and melody together in their songwriting. What makes these songs isn't the fact that they're overly adventurous or anything or that there are a whole bunch of different sections, but it's the way they make use of their strengths and harness them. In all honesty, Colossus isn't all that much of a rollercoaster in terms of style, I mean, after the initial clean guitar intro section, it's pretty heavy throughout, but it has what the band do best in it. The mood is a lot darker and more somber than either of their previous releases, and it really benefits their songwriting. The riffing is a lot better, along with their sense of melody, crafting songs that are more well-rounded with big sounding choruses and epic sounding guitar play. In terms of interesting song structures though, A Vow to Conquer The Oceans is far superior, with a nice moody bridge section. Personally, I'm also a lot more preferable towards the lower register of growling that the vocals are done in for most of this album, instead of the higher screams or, to me, what sound like post-hardcore-ish (I know I'm being really picky) yells. But to return to the atmosphere for a moment, I do believe that it's one of the areas the band have really improved upon, it's dark and moody but isn't overpowering. In some ways it kind of reminds me of mid-era Katatonia, with a sort of gloomy and morose calm overarching each song. On a side note, I personally love how this whole record, artwork, songs, and song-titles all tie together into a whole ocean theme, I just love stuff like that.
Now, I'm not really sure how I feel towards the more djenty kind of songs that are near the end of the album. I mean, they're well done and such, but they don't really feel as epic or interesting as the material the band demonstrated on the first half. Isle of Solace and Voyage of A Wavering Mind are fine, and the latter doesn't feature as much of the djent styled riffing as the former, but it just feels like the band sort of tacked the song together to kind of cash in on the whole djent movement that's getting popular. I honestly don't have as much of a problem with it when it's used more minimally in earlier songs because it's not the main focus of the riffing and it usually provides a nice contrast to the more melodic pace of a song, Convergence for example. I also think that Celestial Tear kind of feels like it's been done before, by the band, not better than before, but the whole idea of having a more mellow song performed in the whole clean guitar way, and then closing it out heavy. I mean, I realize these are more personal quips than real problems that would hinder a listening experience, but like I said, none of them are bad songs, I actually think Celestial Tear is actually a pretty catchy song.
Overall, it's the best album the band has written, for myself anyway, and I find that they're really coming into their own on here. Hopefully they can iron out some of the kinks on further releases but for what's on here, I did enjoy how they've evolved. Fans of melodic death metal with a healthy dose of atmosphere and prog will definitely enjoy this one.
Overall Score: 8
Highlights: Colossus, A Vow to Conquer The Oceans, The Drowning Sun
Posted by maskofgojira at 3:16 AM