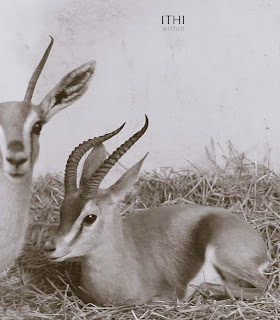 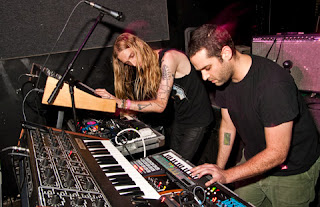 Band: Ithi
Country: New York City, New York
Style: Experimental Noise/Drone
Label: Land of Decay
Ever since I was informed about this release last year I was anxious to hear it. The duo of Luck Krnkr and Joshua Convey definitely hit a goldmine last year with their release The Persistence of Meaning striking a vein that was untapped for the genre. This new mini-album moves even further into a sound unlike that of any other group.
You know, it's kind of weird listening to the original version of Go Forth and Die from the duo's debut album last year, and the version on here. The original version was very much in vein with the rest of the album, it was a very strange mix of drone, gothic industrial, and krautrock, with the latter not really showing through all that clearly. On here, it's almost the entirely other way around, with the krautrock rhythm slowly moving the track forward while hauntingly minimal synth melodies float overhead and the whole thing just swirls together into a strange haze. The track then evolves into a cover of Nico's Roses In The Snow. The distant and far-off vocals provide the only sense of humanity in the otherwise robotic synth wave. The second side of this tape feature the epic noWHere, which features some of the duo's most inspired moments yet. Featuring many delicious layers of noise and drones that cover up some lovely, if rather downtrodden, melodies. Though to say the entire track progresses in a drone fashion would be incorrect, throughout its entire fifteen minutes, you get a variety of ideas, where the track will morph into, more or less, a straightforward piece of droning noise, later on you'll get a section that resemble more of the krautrock side of the duo's sound.
Both sides of this tape exhibit a musical landscape that is wide in scope and features many possibilities for where the duo could go on future recordings. It's one of those projects that is becoming increasingly hard to try and describe to people, though, to me, that only makes them all the more interesting. I look forward to hearing where these guys decide to go next.
Overall Score: 8.5
Highlights: noWHere
Posted by maskofgojira at 2:32 AM