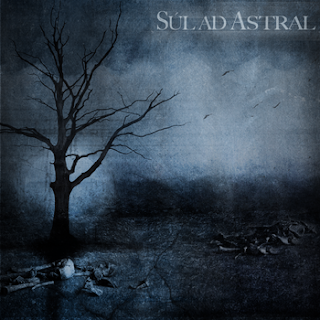 It's only been a couple of months since I first found out about and covered Súl Ad Astral's first single and now they've already put together an album's worth of material. Along with that they've gotten Michael Rumple from Desiderium to provide vocals for the album. Although I thought that their first single was alright, I was certainly interested to see how they've evolved within only a couple of months.
From the word go, the band have chosen to lead the album with the evolved form of their single, now titled To Cherish, which I think works as a double sided sword in this case. The only reason I think that is because, while the instrumental song has certainly evolved from its original form, it's length is a little off-putting, due to it being the longest track on the entire album. I don't know if I would have structured the album that way, but hey, that's just me. But aside from that, I guess I'll go into why this track actually does work as an opener. Aside from the fact that it is an instrumental piece, you'll find that it is perhaps the most basic song in style on the album, owing quite a debt to the likes of Alcest and Amesoeurs and the other works of Neige. It's the type of song that is pretty straightforward blackgaze, nothing more, nothing less; and from there the rest of the album only expands with its ideas.
Production wise, this is a major step up from the single, with a much clearer and cleaner sound to it. The drums are no longer buried beneath the layers of guitars and the bass is quite loud in the mix as well, which I actually found to be a rather endearing quality to this album. I don't know if I'd go as far to say that the band have become more progressive, but there are certainly moments on this album that aren't so tried and true to the blackgaze format. Tracks like In Solitude have a nice range of dynamic climbs and falls throughout it's six minutes, while The Clenching Void has a nice doom metal quality to it that for some reason comes across as very violent and hateful for some reason. But it isn't until the two part Persona tracks where things really start to shift into the more progressive areas. While the ideas are certainly still rooted within the whole blackgaze sound, the tracks feature a wider array of interesting features including solos, Nadja-esque shoegaze passages (though they are by no means droning), and more epic sounding doom sections. I know some people have complained about Rumple's vocals on here, but his vocals are actually one of my favorite things about this record. Unlike a lot of other vocalists from this style of music, who tend to, more or less, sound rather similar to each other, Rumple not only makes use of his considerable range but also comes across far more genuine than a lot of other vocalists. His cleans are soft and whispered while his screams and growls sound pained and emotional, hear Amaurosis for a good example. While I do think that his vocals could have been mixed into the music a little bit better, it kind of feels like the vocals were just placed on top of the music in some cases and it just sounds a bit odd, I do think his performance is a real stand-out on here.
It's a solid full-length debut that is certainly a nice change from the rather usual, and by now overdone, blackgaze sound. It's not without its own problems, but as far as I'm concerned originality isn't one of the bigger ones, and I think future releases will definitely have these guys maturing into something special. If you're a fan of more interesting variations on the blackgaze sound, or post-rock influenced black metal, I'd say that this is going to be one of the better albums for that you're going to hear this year.
Overall Score: 8
Highlights: In Solitude, The Clenching Void, Persona II: Solar
Posted by maskofgojira at 1:08 AM