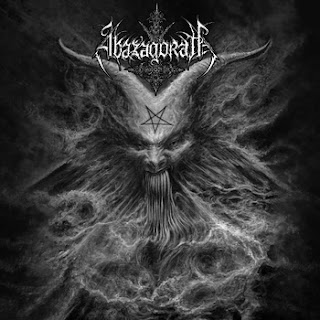 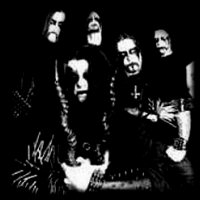 Speaking as someone who loves black metal, I really have not delved into the early American scene as of yet. Not to say that I'm not familiar with the bands that came out and helped to form the ideas which would go on to establish the later American groups, but I have yet to really just explore more than a handful of bands. I've certainly been aware of Abazagorath's debut Tenebrarum Cadent Exsurgemus for quite a while, I know it's cover art well, but this new EP will have been the first time I've listened to any of their music.
After a rather impressive opening, which really did build a nice atmosphere, the band launch into no-nonsense old-school black metal. It's intense in its performance and old-school in its approach, reminding me of early Darkthrone and Root records, at times bringing in a little bit of a Dissection vibe as well. I mean, the songs on here are certainly well executed and aggressive, but aside from that I just couldn't get into it. The riffs were fine, but nothing that was enough to hold my attention. In fact, I felt like these tracks just sort of dragged on, which is never a good thing, but it's like they started at point A, the band blasted away and whatnot for a couple of minutes, and by the end of the song they were still at point A. Immortals was the only track where I felt like the band was diverting away from the standard form of black metal that they were doing on the other tracks. The incorporation of a more groovy middle section and a very melodic closer really drew me in. Closer, Storms of Destruction starts out really promising but then just descends into standard melodic black metal territory (not to say there aren't sections of the song that redeem it). In the end, it was more of a hit-and-miss sort of release for me. There were some cool songs, but a lot of it just sort of dragged on and didn't do a whole lot that I haven't heard before.
Maybe I just don't listen to enough old-school stuff, but this really didn't do a whole lot for me. I wish I could say something more positive about this release but sadly it just didn't provide me with anything that I haven't heard before. Old-school fans will more than likely get more out of this than I did and I definitely recommend you check this out if you happen to enjoy more 90's oriented black metal.
Overall Score: 6.5
Highlights: Immortals, Storms of Destruction
Posted by maskofgojira at 12:48 PM