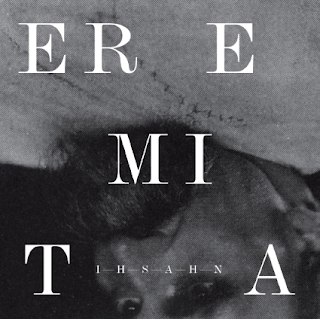 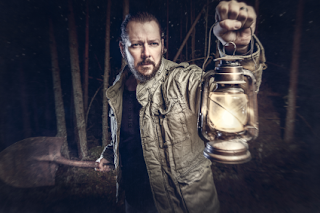 Not that he really needs an introduction, but Ihsahn has proved throughout the last two decades to be one of the most unique and creative men within the metal world. In all of his various projects, he has created some of the most timeless and inspirational albums within the worlds of avant-garde, progressive, and black metal. I know that not everyone who's an Emperor fan followed Ihsahn into his solo ventures, but I've found that he's actually made some of his best work since leaving his past band behind.
I guess one of the biggest draws to this album, if people weren't coming into this for an Ihsahn album, would have to be the high profile guests on here. Though both Mikael Åkerfeldt and Kristoffer "Garm" Rygg have participated on the main man's first two solo releases, I think that having Devin Townsend, Jeff Loomis, and the lesser known, but no less talented, Einar Solberg on here will draw many into this album. Ihsahn has also brought back Jørgen Munkeby from Shining, who was on After if you didn't already know that, to do saxophone on here. From my point of view, despite having such high profile guests like these on his record, none of them overpower Ihsahn on their respective tracks. In my opinion, besides Munkeby, who performs on numerous tracks, the tracks that are just the main man himself prove to be the most powerful on the entire record. I know that there was a good portion of people out there that felt like the saxophone on After ruined that album because it was a pretty eccentric performance, and I realize that it did make that record kind of polarizing, though I wouldn't change anything about that record. On here, the sax performance from Munkeby is a lot more controlled by comparison. It doesn't stick out as much and tends to play more melodic lines than on the previous record.
As much as all his solo albums have been leading up to this point, black metal has largely been abandoned at this point by Ihsahn in favor of a more progressive sound. Though there were still very key moments on After that retained that black metal style of riffing or that harshness, very few points on this new album hold that same sort of identity to them. The sound used on here is, from my point of view, a very unique form of progressive metal that to some might not even think to call it progressive metal. Is this still an extreme album, for sure, but it's extreme in a very different way than both Emperor or Ihsahn's first two solo albums. There are points on here where the sound moves into what I'd like to call "avant-doom". Tracks like The Grave and Departure are slow and heavy but are extremely rich in texture and sound, and I don't use the term "avant(garde)" lightly, while retaining the sense of darkness and solitude that the rest of the album does, but transforms it into a very different beast. It might please some to know that Departure in particular is the closest thing Ihsahn has produced recently that sounds like his very underrated and underappreciated project Peccatum. Not only does that track have a similar sense of melancholy as that project did in its later stages, but it also features the man's own wife and other half of that project, Heidi Tveitan, on vocals as well.
In terms of accessibility, I found this the most challenging release Ihsahn has released since Prometheus: The Discipline of Fire & Demise back in 2001. Most of the songs on here feature melodies that, at least for myself, were nowhere near as immediate as on his earlier releases. It is a far more abstract kind of record that will not reveal itself on a first, or even second listen, but one that slowly worms its way into your head through repeated listens. In that regard, I do think it was a wise choice to pick The Paranoid as the first single for this album, as that and Something Out There are probably the most immediately catchy tracks on the entire album. Though, I would still say that the hooks on those tracks is still quite different from those I've heard on other records, in general. There are points on here where the music veers into really weird, and unexpected, territory, hear the last two tracks, that show a side that I never thought I would hear from Ihsahn, which I for one am glad to hear. I am not only impressed at the exploration into more abstract territory, but I commend this man for pulling it off with applaud, I know firsthand how hard it is to take a risk and just throw in an odd part into a song and it's by no means easy, even if Ihsahn makes it seem that way on here.
As much as I love this sort of stuff on a record, I know that it's not going to be for everyone, despite all the critical praise that I'm sure will come once this is released. It's not as immediate a record as I thought it would be, but in the end I actually think this is my favorite recording Ihsahn has released under his name (and is certainly near the top of all of his releases in my book). I certainly suggest you check this out as soon as you can, it really is worth your time even if "prog" isn't typically your cup of tea.
Overall Score: 9.5
Highlights: Every Track Is A Highlight
Posted by maskofgojira at 3:00 AM