Circle of Ouroborus - The Lost Entrance of The Just (2012) 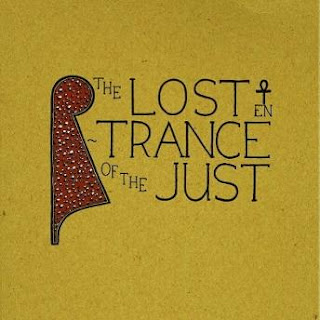 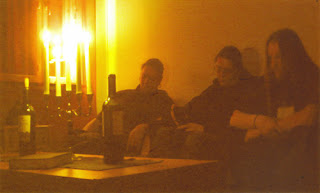 Well after a rather productive year of releases in 2011, the duo known as Circle of Ouroborus have released yet another full-length (though productivity is one of their strong points). After Eleven Fingers I think what the duo would release next (in terms of a full-length) was very anticipated. The second part in a supposed trilogy of releases, I have high expectations for this and it's follow-up.
Based on what I had read and heard from others who've covered and listened to this record already, I was expecting something that, while it would be sonically similar to Eleven Fingers, would be a far more challenging listen. The atmosphere is far more dense and murky on here than their previous work and the overall mix is quieter, which leads to a record that is a bit harder to decipher and figure out. Yet, for some reason, thanks to the more melodic and, I guess what you could call more traditional, approach towards songwriting, especially in the vocal department, this album comes off as both a more and less esoteric record than it's full-length predecessor was. From the accounts that I referenced, I thought it would take me far longer to get into this record, but within the first couple of listens I found myself recalling melodies from songs like The Way of The Will and Skyline Painter more often than that of pretty much any other release in the duo's discography. I did not expect such an immediate reaction to this album, if you want to call a couple of listens immediate.
The almost synth-pop via post-punk via black metal sound that the duo somehow managed to perfect on last year's Eleven Fingers is in full swing here as well, as I said above, but thanks to the quieter mix and denser atmosphere surrounding these songs, it can come off as a very different offering. It's strange because of the overall atmosphere might lead you to assume that it's the sort of record that would leave even the most stubborn listener with a headache when trying to pick it apart, and maybe that will apply to you. Yet, for some reason, this album and it's full-length predecessor seem to have struck a chord with people and it seems like the music they're pumping out is only getting more and more recognition. Maybe I'm wrong, but I don't remember seeing nearly as much coverage for their work until Eleven Fingers blew up. Though you can never really expect where the band is going to take their sound on any record, this seems to be one of the handful of records they've released that I find myself returning to over and over again (others include the aforementioned Eleven Fingers as well as the Hiljaiset Sanat record they put out back in 2010, in case you were wondering). It just has that sort of magical quality to it that, from what I've experienced and from what I've read from others who've listened to the band, keeps you wanting more despite how strange, esoteric, and daunting their sound is.
In some way, this is a more black metal record than anything the band has released in a long while (excluding the three-cassette box for Armon Keitaalla, which I think was actually recorded after this anyway). Be sure that this is still very far away from being anything that a true kvlt black metal fan or a metal purist would call metal, there are certainly some vocal lines and guitar lines that remind me a little bit of their more aggressive roots. I mean, the guitars throughout closer Toivosta Syntynyt wouldn't sound out of place on a black metal record, I would say anyway. From the interview that my good friend Jon did with Antti Klemi, it seems like they're returning to a more aggressive sound in their more recent recordings so I wouldn't say that some of that might have come through, unintentional or otherwise, on here.
I find myself returning to this album a lot more often than I remember returning both its full-length predecessor and much of the duo's discography, which should point to how captivating this release is. Definitely the duo's crowning achievement to date and it's something that you do not want to miss out on hearing this year. No, I'm not getting paid to say this, Handmade Birds and Circle of Ouroborus release another masterpiece. Why are you not supporting them? Do not wait to pick up one of the remaining copies of this!
Overall Score: 9.5
Highlights: Every Song Is A Highlight
Posted by maskofgojira at 6:36 PM