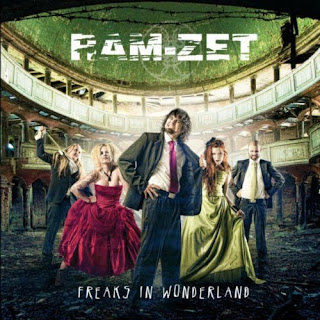 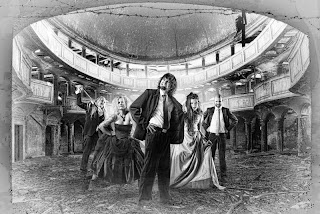 Band: Ram-Zet
Country: Hamar, Norway
Style: Avant-Garde/Gothic Metal
Label: Buil2Kill
It doesn't feel like it's been three years since Ram-Zet has release a new album, but it has. I remember trying so hard to find Neutralized back in 2009 because it was the first new Ram-Zet album being released after I became a fan of them. I can honestly say that this album made me anxious in much of the same ways.
I'll just say right off the bat that I do not approve of this cover at all, not that the band have ever had the greatest covers, this one is just really lame to me. But onto the music side of things, because there really isn't any more need to discuss the cover anymore. If you're at all familiar with Ram-Zet, you should know that this album will certainly differ from their last one, since they always manage to shift their style up just enough on each record to make it stand apart from their last one. When it comes to this album, in my opinion, this is by far their most "avant-garde" and weird release to date, far surpassing anything they've done in the past. I mean, they've always been pretty weird, but this album approach Sigh levels, or Mr. Bungle at times even, of weirdness and outlandish genre hopping. It's that sort of vibe on here.
On first listen, I wasn't quite sure how to really grasp onto this album. If you've looked through this site a little bit, you'll know that I love my totally weird and avant-garde and experimental bands and albums, but this one gave me a little bit of trouble because I don't think I was expecting this sort of an album from the band. 2009's Neutralized was probably the band's most straightforward and metallic record, and I personally think it has some of their best songs on it. Because this one is a bit more all over the place and not as direct with its songwriting, and none of the band's previous work has really been quite as weird as this album is, it was a bit harder to get a handle on. I'm sure some would argue that 2005's Intra was just as weird, and while that album may have been weird, I think that in comparison with this album, this one surpasses that one by a mile, at least. That album seemed to be based a lot more in progressive and technical metal, while this one jumps all over from acoustic flamenco guitar solos to Meshuggah-esque groove passages before shifting into a more operatic chorus melody, it's really all over the board. It's kind of an interesting album because during the first couple of songs, it really does sound like the entire band is just going off and doing whatever they want, but around the mid-point of the album, the entire thing really comes together into a cohesive album. I'll be honest and say that while I do enjoy opener Story Without A Happy Ending, it is probably one of the least disciplined tracks on the entire album, so parts are just coming in and out really randomly, which is why I wound up liking some of the shorter and more straightforward tracks like Land of Fury or The Sign more.
While it's not as memorable or catchy, which in some ways could be regarded as the same thing, as some of their older albums, I still enjoy this album very much and love it for being as weird as it is. I'm not really big into female vocalists, mainly because they've been ruined for me thanks to my exposure from power/symphonic/progressive metal as a child, but I do like the vocals on here (if that says anything at all). I definitely recommend you check out this album if you're a fan of more avant-garde and off-the-wall metal bands. I love bands like this and hopefully you'll find something that keeps you coming back as I have from this band.
Overall Score: 9
Highlights: I Am, Land of Fury, As The Carpet Silent Falls
Posted by maskofgojira at 2:05 AM