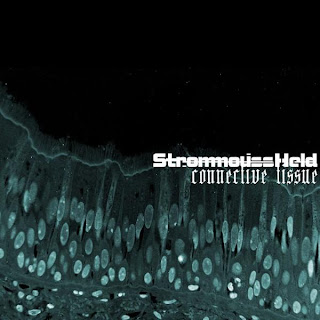 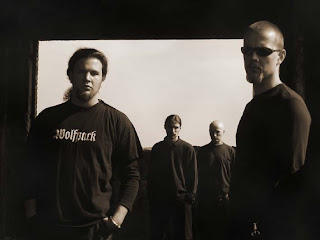 Mass Hysteria On A Molecular Level.

StrommoussHeld is an electronic, avant-garde, visual effects quazi-metal band from Poland. Members of StrommoussHeld are involved in different projects that people from different scenes will most likely know, but fans of more progressive and experimental music will probably be more aware of; K-vass, who does vocals in this band, also sings in the progressive rock band Psychotropic Transcendental and creates visuals in the doom band Blindead. Maels, on vocals, guitar, and electronic in this band, plays in the industrial band Sirius. L.th who plays bass here sings and plays bass in the symphonic extreme metal band Sammath Naur.
What fans of this band can expect from this single is a somewhat mix of post-rock, sludge metal, symphonic metal, and electronic music. As opposed to StrommoussHeld's previous outputs which have been a little more chaotic with large industrial and electronic bursts mixed in with the more extreme metal parts, "Connective Tissue" is a little more slow and balances the electronic elements and the metal elements a little better into one sound as opposed to burst of one over another. This single is a little easier to listen to in full. But that should be expected since the last StrommoussHeld album was released back in 2004. The songs on this single feature 2 new original songs and a cover of Laibach's We Are Time. Long Ago Gone is very much the industrial and electronic side of StrommoussHeld's sound, being very much biased in trip-hop and industrial avant-garde music. Long Ago Gone does have it's fair share of metal bursts, but is more likely to be heard as more electronic. The following song, Connective Tissue, is the metal side of the band. This song is very melodic and sludgy feeling, being much heavier than the other 2 songs on this single. We Are Time is probably the most straightforward song on the single. It features a more structured and direct type of a song with typical verse-chorus-verse-chorus-bridge-chorus format. But the way they blend their sound into this cover makes it very dynamic, almost sounding like a Rammstein song during the chorus.
Overall, Connective Tissue is a good view into what fans can probably expect the new album to be in. This is a good little release to keep fans waiting for it to be released this year. Hopefully fans can get into it.
Overall Score: 7
Highlights: Long Ago Gone, Connective Tissue, We Are Time

Posted by maskofgojira at 4:00 PM