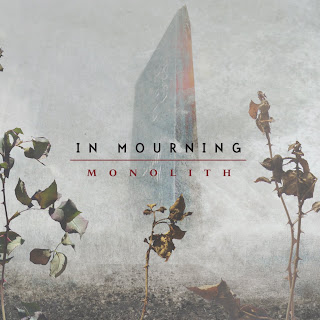 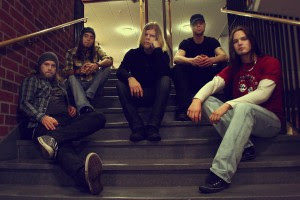 In Mourning is a progressive melodic death metal band from Sweden. Started back in 2000 as a gothic band, they've moved into a more technical direction, taking ques from bands like Opeth and Katatonia. As their first album, "Shrouded Divine" was largely based on an Opeth comparison, "Monolith" has expanded on the sound of that debut and morphed it from a copycat band into an influence.
Monolith shows great leaps forward from the debut in terms of song structuring, song-writing, and overall playing abilities. Vocalist Tobias Netzell shows a great skill in vocalizing himself. What this means is that he does not dominate songs and he doesn't sound cheesy when his cleans come into play. Desplaying his sorrowful cleans and his deep growls and screams perfectly on The Smoke.
In Mourning has a sound that is very heavy guitar based, and that can be attributed to their band having 3 guitar players. Vocalist Tobias Netzell plays guitar, while members Tim Nedergard and Bjorn Pettersson are the "real" guitar players. These 3, although I am unsure of how many songs Tobias plays on, play wonderfully together, balancing the heavier moments with melancholic clean moments, demonstrated in a song like The Poet and The Painter of Souls.
Though the overall style is, once again, influenced by Opeth and Katatonia, you can still hear parts influenced by others. The song Debris has a section influenced very much by Meshuggah that moves into a part sounding like Porcupine Tree. Though none of these influences could be called bad, it just needed to be mentioned that In Mourning is not just a sound replica of two bands. A song that probably best showcases all of their influences is in the song With You Came Silence, displaying a Katatonia like mood, angular Opeth riffs, a brooding Meshuggah sound, and mixed with some trashy riffs in the middle before going into a doom part.
It must be said that while In Mourning is primarily a guitar heavy band, the bass is still very audible. That is a trait not many can have, and pull off well. It seems like bass player Pierre Stam is skilled enough to play his part, but still exhibit a personality in the music. The Smoke shows this talent around the 3 minute mark.
Drummer Christian Netzell shows his playing style greatly has improved from "Shrouded Divine." Playing parts that are different from the rest of new progressive bands out there. Pale Eye Revelation, is has many parts that I assure you, could have been blasted through with double-bass, but are not utilized until later in the song.
The overall potential and sound of this band is found in the almost 13 minute closer, The Final Solution (Entering The Black Lodge). This song moves progressively through it's heavier sections, weaving into and out of more psychedelic clean guitar passages. With strong vocals that fit the overall sound of this song, feeling very melancholic in nature.
Overall, this is a great second album, and definitely a band to check out if you haven't already. A lot of highlights on this album. A lot of stuff progressive fans will be drawn to in this album.
Overall Score: 8
Highlights: Debris, The Smoke, With You Came Silence, The Final Solution (Entering The Black Lodge)
Posted by maskofgojira at 11:09 AM