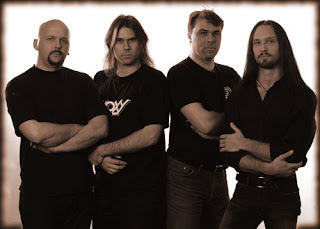 Invisible to Who?
Nightingale has been around since 1995 making Gothic/AOR/prog-rock for the masses. Starting out as the one man Dan Swano genius, crafting a Sisters of Mercy tribute of sorts with their first album, "The Breathing Shadow." Since then Dan has teamed up with his brother Dag on second guitar and keyboards, Tom Bjorn on bass and back-up vocals, and Erik Oskarsson on drums. From "The Closing Chronicles," their second album, Nightingale has been evolving into a band playing a style of through-back 80s hard rock/heavy metal.
On this album, Nightingale has expanded their hard rock vibe to include a little bit of everything they've done in the past. "Invisible" showcases their playing styles with strong, catchy riffs, heavy bass, pounding drums, and soaring vocals that will encompass you in these giant hooks for choruses. Songs like Still Alive or To The End sound like they could have been on an early White Snake or Deep Purple record. The keyboards played on this album also have the old through-back vibe to the 70s/80s with the Hammond organs played on songs like A Raincheck On My Demise.
But this album is not all hard rock good time riffs, this album also has it's fair share of mellow songs or ballads. Whether it's the blues-esque To The End or the power ballad The Wake, you get a sense of personality in Nightingale's songs. What personality means in this case is the ability to create an emotion within the listener, either through the uplifting Atlantis Rising, the sobering Misery, or the sombre Staligrad. Nothing on this album could be described as a downer type of song, as most of them can just as easily get your fist pumping or singing along with the words to get you in a good mood.
Overall Score: 8.5
Highlights: Invisible, Atlantis Rising, To The End, The Wake, One of The Lonely Ones, Stalingrad
Posted by maskofgojira at 4:08 PM