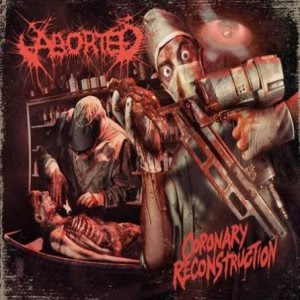 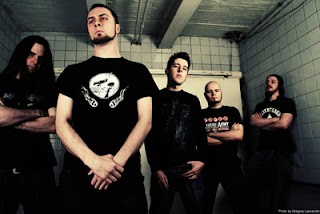 Brutal Is Not Always Best.

Aborted is a death/grind band from Belgium. Having been around since 1995, Aborted has credibility in the death metal scene. This new EP is the result of Sven de Caluwe being, once again the only remaining founding member of the band.
"Coronary Reconstruction" is the result of Sven bringing Eran Segal from Whorecore and Ken Sorceron of Abigail Williams on guitars, Cole Martinez, from Sven's side band System Divide, on bass, and former collaborator on "Goremageddon," Dirk Vanbueren on drums. This brings somewhat of a more "old-school" type of sound. These members bring that Goremageddon style back to this EP.
The title track features a very groove based style similar to that of a Dying Fetus song. The chorus in perticular feels more like a slam-styled track. But the best part is probably Dirk's drumming patterns, feeling very free-flowing in this tightly binded song. The following song, From A Tepid Whiff, is a very structured song featuring a breakdown in the middle.
The following songs, Grime and A Cadaverous Dissertation, are possibly some of Aborted's most melodic songs. Grime features very strong melodies throughout the entire song and especially during the solos. While A Cadaverous Dissertation features more punk-like speed, similar to that of early Soilwork or Dark Tranquillity. These songs have seemingly been influenced from the more melodic writing approach of Ken and Dirk.
The final song is a cover of the death metal classic, Left Hand Path, originally done by Entombed. A well done cover, it is unfortunate that this is the song that sticks in your head the most. Fans of the original would still enjoy this song.
Overall, this is a decent relese from Aborted. Though not as great as previous albums like, "Engineering The Dead" or "The Archaic Abattoir," this EP features songs that are overall, well preformed. If you're a fan of brutal death metal, check this out.
Overall Score: 7
Highlights: From A Tepid Whiff, Grime, Left Hand Path
Posted by maskofgojira at 4:35 PM