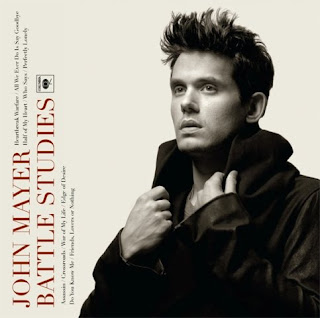 Studies In The Art of Love.

John Mayer has returned with his most coffee-house record yet. But saying that does not mean that these songs couldn't get lighters out and people singing and dancing to this on a stage in front of thousands. This has your more up close Mayer as well as your rocking Mayer. A good mix. You can get a sense of where this album lies after the clean strokes of Heartbreak Warfare, the coffee-house ballad All We Ever Do Is Say Goodbye, and the rocking duet of Half of My Heart. Probably his most personal record yet, it still has the balls to get any rocker singing along. In no time you'll be familiar with these songs and you'll be pressing the repeat button on your music player.
While most of the songs follow the more blues biased licks and riffs, the song Assassin is where this changes a little bit. The song begins with a piano and music box and doesn't go into an immediate chorus. This gives the song a little bit of a darker edge than the other songs before it. The following Robert Johnson cover, Crossroads, is also a change. Crossroads is the most funk biased song Mayer has ever attempted, and it succeeds. It has the beat that will have you jamming' on it the first time you hear it.
"Battle Studies" shows a little more diversity than Mayer's previous outputs and continues his ability to write great hooks while maintaining an individual singer-songwriter status. A great demonstration of his guitar playing, showing both the previously mentioned coffee-house vibe on some songs, and more eclectic rocking on others. A great listen.
Overall Score: 8
Highlights: Heartbreak Warfare, Half of My Heart, Who Says, Assassin, Crossroads, Edge of Desire, Friends, Lover, or Nothing
Posted by maskofgojira at 1:45 PM