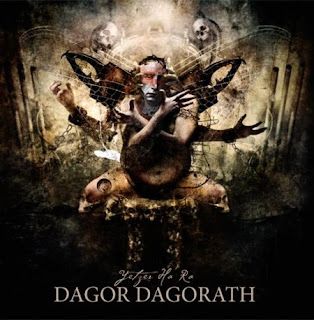 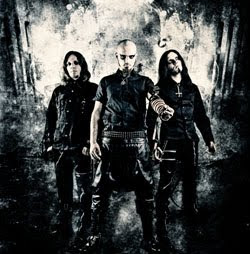 Dreaming of Heaven With Symphonies.

Dagor Dagorath is a symphonic blackened-death metal band from Israel. Their sound is very rooted in that symphonic sound. Though the way they play is in the whole death scene, the vocals and atmosphere is what gives this band the whole blackened thing.
Having connections probably helped this band out. Having the leader of symphonic death metal Greeks, Spiros "Seth" Antoniou of Septicflesh, do the artwork of your debut album is impressive. The cover of this album features the same demented/morbid humanity that Septicflesh has had for their last releases.
The sound of this album, as already stated, is rooted in the whole symphonic blackened death metal sound. But the sound itself owes a lot to bands like Septicflesh, Rotting Christ, and Cradle of Filth. Using the more rabid techniques that try and make themselves seem fierce. The vibe you get is a little off-putting from the amount of orchestral influences on some songs like The Devil On A Chain.
Vocally, Vorog, has a dynamic range that perfectly fits this band. His more black metal rasps bring that whole kind of Dani Filth and Dimmu Borgir vibe, while his lows provide a fitting ground point for the album. His use of more heavy breathing vocals is also employed more than once throughout these songs, adding a little more variety.
The most impressive thing on this album is the guitar playing. Switching between more tremolo picking into a death metal styled palm muted riff is flawlessly executed on the song Heaven In Hell. While on the song in particular, more technical riffs are dispersed to make things a little more interesting.
Some of the songs on this album can be a little dull sounding and overbearing with so many layers of orchestral tones and atmospheres. Plus some of these songs are a little too short, which sounds a little weird, but it is on the longer songs where Dagor Dagorath show more diversity and adventurousness in their songwriting. Some of the songs under the 7 minute mark provide little more than a break between otherwise headache inducing symphonic epics. These shorter songs do provide Dagor Dagorath to show off more of their melodic tendencies than an 8 minute epic would show. A prime example of this would be the song Vicious Circle, which combines strong melodies while the symphonic elements are placed further in the back.
Overall, this album is far from perfect, but contains some entertaining songs. Fans of more symphonic metal are probably going to enjoy this album a lot more than I did. A fairly decent record with some cool sounding riffs.
Overall Score: 6.5
Highlights: The Hell In Heaven, Heaven In Hell, Vicious Circle, The Call
Posted by maskofgojira at 5:21 PM