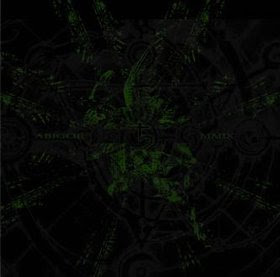 When God Leaves, We Come Out and Play.

Abigor is a black metal band from Austria. Having been known to dabble into more experimental territories with previous albums, this album can come across differently than most albums. Some fans will find this album very chaotic and almost mathcore-like sounding while others will find more in common with their previous records from the industrial elements used.
This record is a split record with the German industrial black metal band Blacklodge. This is not a collaboration album, it is simply two separate albums being released together. Both albums express a theory of Albert Einstein.
Though there are only 2 official untitled songs on this album, each of them contains breaks that separate one song from another. These breaks provide a small breather between either crazy, almost Dillenger Escape Plan-esque mathcore technical parts, more atmospheric industrial sections, and more traditional black metal sections of music. But most of the time, all of these sounds are just thrown together and beaten into one another.
These separate sections are another reason why this album could throw a lot of people and fans of this band or style for a loop. All of these more chaotic styles almost juxtapose each other in a normal circumstance, but seem to fit together in most of the sections. Somehow Abigor have seemed to create an extremely technical, dissonant, harsh sounding record without losing any of the familiarity of their past works. Some would call this sound progressive, or to an extent even schizophrenic would be appropriate.
Both of the songs are almost 20 minutes long. This could also throw people for a loop, in that even the longest Abigor songs haven't been over 10 minutes. The patience it takes to listen to the whole album, or even a song, can be a little tedious, but with so much going on, you'll find yourself either listening to the song again or just rewinding to see what you might have missed. An extremely complex sounding album with a lot of layers that will both confuse and dazzle you with the uniqueness that they are.
Between these two songs, Part I is definitely the more chaotic sounding. Where as this song shifts during the almost 20 minute course of itself multiple times, the second part includes more traditional Abigor styled parts, with the occasional avant-garde/mathcore part. These parts to some will be random, but create a large part of the unpredictability of these songs. Open ears will be able to observe more complex sounding patterns opposed to mindless noise.
Overall, these songs can be a bit overwhelming and take a little longer to get into, but patience is a virtue in all good music. If you're a fan of more experimental, progressive, or avant-garde sounding music, this MIGHT float your boat. Approach with caution, because this review won't give you the same vibe you get when you listen to this in full.
Overall Score: 7.5
Highlights: Part I, Part II (Different ones for different occasions)
Posted by maskofgojira at 4:48 PM