Annotations of An Autopsy - II: The Reign of Darkness 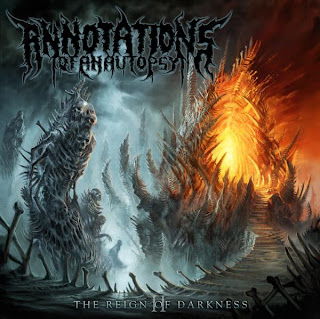 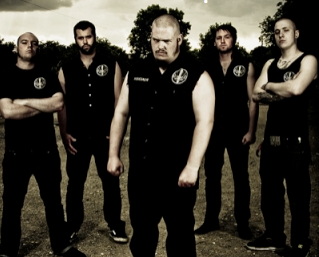 How Many Times Has This Title Been Used?

Annotations of An Autopsy. That is a mouth full for just a band name, similar to BTBAM, long name but good musicians. The same could be said for this band; long band name, but skilled in their craft and getting better with each album.
I couldn't tell you about their last album, "Before The Throne of Infection," because it was very trendy deathcore, chugga-chugga-core. But this, "II: The Reign of Darkness," is a massive step forward into modern death metal/brutal death metal territory. Filled with catchy grooves and breakdowns that aren't just the same breakdown on every song. You can hear the similarities, in terms of breakdown styles, in a band like Suffocation or Dying Fetus, where they have breakdowns, but they're used with discretion and are not dumbed down for the mainstream.
The guitars are very heavy and down-tuned. The way these guitars are played though is what makes this worth listening to numerous times. Catchy grooves and hooky riffs bring this album to the earphones over and over again, like in Cryogenica. Solos are used in the same way breakdowns were, used with discretion in songs. When they are used, they are actually very melodically played, I won't say any names, but unlike most bands in this genre, deathcore/brutal death metal, these solos are not just scrambled notes being played fast over the fret board. A stand out moment is during Emptiness, where the guitars are slowed down and moved into clean tones before moving back into heavier parts again. This is done numerous times during the coarse of this song.
Vocally, Steve Regan is spot on with his death growls. Used mainly are his very low, guttural, sewer/toilet bowl vocals. Unlike, what I've heard, of brutal death metal, Steve is very "tasteful" in his use of growls. What this means is that he has a sense of rhythmic timing and style, where a vocal pattern can still be called hooky. With a special guest vocal spot on Bone Crown by none other than Erik Rutan of Morbid Angel and Hate Eternal. Some songs do have your typical deathcore moments of chant alongs, but are used in a more death metal fashion with brutal vocals.
Lyrically, something I didn't favor on their debut, has improved vastly on "The Reign of Darkness." Steve's lyrical content has shifted from rape, kill, murder, sodomize, and fuck everyone lyrics to more of the end of humanity and the evilness that is Christianity type of lyrics, definitely sounding like David Vincent type of stuff, demonstrated on Impale The Sun. But we have out fair share of big words in here, so he can sound smart. This is shown in a song like Portrait of Souls and Cryogenica, a song where his higher range is displayed.
The final track, Into The Black Slumber, displays more melodic and slower territory. This song is 8 minutes long, and doesn't seem that long for a brutal death metal song. Displaying more classic sounding death metal riffs, akin to those of early Morbid Angel or Cannibal Corpse, in terms of they way the riff sounds. This could very well be AoAA's *God of Emptiness.*
This is a fairly good album from a newer band that came from the whole deathcore thing. This is a band to watch. Definitely looking forward to see what they do after this. Will they get better and go further into more brutal death territory or back into deathcore.
Overall Score: 8.5
Highlight: In Snakes I Bathe, Bone Crown, Emptiness, Impale The Sun, Cryogenica, Into The Black Slumber
Posted by maskofgojira at 12:34 PM