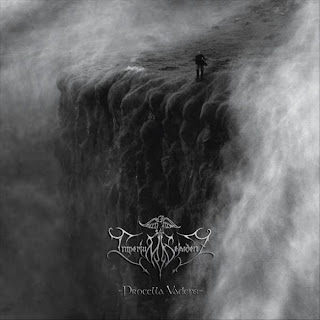 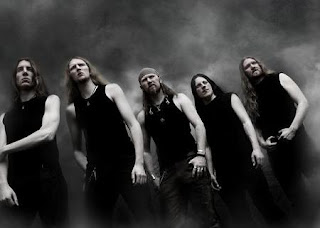 Imperium Dekadenz is a black metal band from Germany. For those who already know of this band's previous records, you know what to expect when it comes to the heavier elements of the band. But this record has a much larger sound with more eclecticism in it's sound.
"Procella Vadens" is a record that can be compared to their previous album "Dammerung Der Szenarien" in terms of it's style. Though that record focused more on the band's black metal roots, this record contains a much more, almost, progressive sound in comparison. Though that element of depressive black metal can still be found on this record, elements of progressive rock, folk, and dark ambient music pervade the sound of this album. A Million Moons features much more diversity in their song structure and overall sound with the use of both aggressive black metal parts mixed in with clean guitar passages that sound almost ethereal with strings that give it a more melancholic feeling. While A Decent Into Hades, features a very world music vibe, with female vocals and more tribal drum patterns underneath more symphonic music.
Acoustic moments can be found throughout this entire album. A thing brought from the previous album, but enhanced on this one, it adds a lot to a song like Lacrimae Mundi, which is aggressive throughout the entire song before the last minute breaks into an acoustic interlude to the next song, or An Autumn Serenade, which features one of the most captivating and lamenting passages on the album. The entirety of A La Nuit Tombante is acoustic, except for the solo, with very sorrowful atmospheres and strings that make this instrumental very enjoyable.
Production wise, this album is much more listenable compared to the previous. It still has the DBM styled produced of noisy sounding guitars, vocals sounding very painful, and a lot of atmosphere. But the sound is still very listenable compared to some other bands.
"Procella Vadens" is a record that has been recorded by only frontman Horaz, playing the role of both a guitarist and the vocalist, and Vespasian, who performs drums, bass, keys, and additional guitars. For only 2 people, this record shows a fair deal of diversity on their part. While never straying too far into unknown territory, they make a enjoyable songs with a lot of different atmospheres.
Drummer, Vespasian, is a highlight on this entire album with his playing. While most of his playing is very much in the vain of old black metal bands, he mixes it up with more simplistic beats and interesting fills. Most of the double-bass that is utilized on this record is very mid-paced and never seems to overpower the rest of the song. This is showcased on the 10 minute epic, A Million Moons.
Vocalist, Horaz, is another standout on this album. His vocals never overpower a song. In this case, it means his vocals are spaced out and very sorrowful. His vocals are somewhat more diverse for a black metal band. Though he doesn't mix up his overall style on this record, he shows that for the more depressive side of the band, he can add that sort of vocal delivery. The same can be said for a song more traditional like Ego Universalis, with it's more straight-forward black metal structure.
The one band who Imperium Dekadenz could probably draw a comparison to is early Shining. But this record has moved into an almost doom like atmosphere, unlike modern Shining. Both bands had this very sorrowful atmosphere early in their carriers, it will be interesting to see where Imperium Dekadenz takes this sound on their next record.
Overall, this record is very enjoyable. A good listen with some very cool doomy vibes with moving into the doom genre. Definitely worth checking out for fans of bands like old Shining, Nortt, or Xasthur. Good times and bad, a cool listen for sure.
Overall Score: 8
Highlights: A Million Moons, A La Nuit Tombante, An Autumn Serenade, A Decent Into Hades, Procella Vadens
Posted by maskofgojira at 2:16 PM