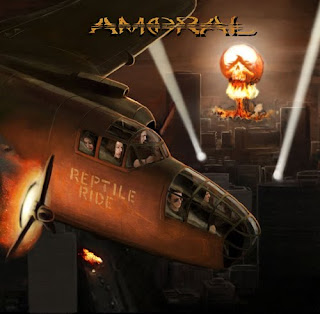 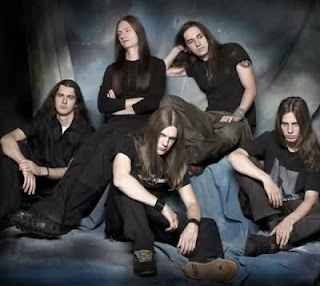 This Is One Wild Ride (No Breaks Required).
Amoral is a technical death metal band from Finland. Amoral have always done albums differently than other bands of a similar genre in terms of structuring songs. Amoral are one of the few bands who can be technically mind-blowing but also write great melodies and solos, similar to the way a band like Anata writes songs. But Amoral have always been one to impress.
"Reptile Ride" is no exception to this, it is in fact the perfect album to give a new fan or a person getting into the whole "tech" genre because of the musicianship and song writing prowess. Songs show a great deal of melody that can become very addicting, showing a little bit of where they would go onto their next album, with a power metal influence. These songs are perfect for the average death metal fan but also a great new listen to fans of more progressive metal, power metal, or even classic metal; the perfect example being the song Mute, which starts off very much in an almost kind of Dream Theater meets Megadeth style.
A lot of the songs on this album have the obvious power metal influence, but that's also what makes these songs and this album different from others. The songs have great influences from the whole prog-metal, power metal, and old-school thrash metal scenes while still adapting them to their style of tech-death. A very unique sound to them.
Tracks on this album are all below the 6 minute mark, but it works for them, keeping the songs short and concise as appose to stretching them out and using boring riffs just to elongate the songs. There really isn't a bad song on this album. Whether it's the power-death metal anthem Leave Your Dead Behind or the angular melodies on Few and Far Between all the songs have a unique take on these influences without sounding like their influences directly. Though you probably could have gone either way with the prog influence in earlier songs, it's not till the instrumental Apocalyptic SCI-FI Fun or the death/prog song Pusher that it actually becomes part of the songs. A standout thing about these songs is the soloing, being very melodic and not feeling like a solo is there to just have a solo or fill space, they feel as though they are actually a part of the songs themselves.
Lyrically, this album is a little different. The songs, instead of focusing on death, murder, killing, exc., they instead seem to be a little more influenced by anger and paranoia of people and people watching you. This is shown on songs like Hang Him High or D-Drop Bop.
Overall this is a very strong effort for a genre which can be boring easily. Amoral bring a breath of fresh air into an otherwise mostly lifeless style of music. A great listen and a must have for any fan of death, thrash, power, prog-metalheads.
Overall Score: 9.5
Highlights: Every Song Is A Highlight
Posted by maskofgojira at 5:28 PM