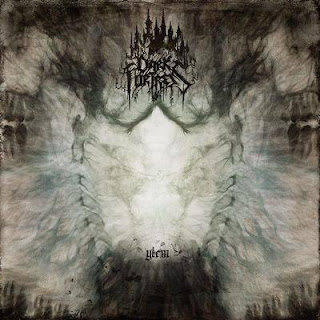 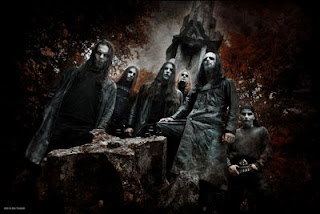 Heirs to The Celtic Throne Make Their Title Known.

Dark Fortress is a black metal band with influences from all side of the metal spectrum. All these sounds are melded into the black metal standard sound for them. "Ylem" is a statement in the dark that will silence the rest of the metal community with it's unique sound and impressive lyrical content.
"Ylem," as described by vocalist Morean, is the state of the elements before the big bang and this album is supposed to describe the state of the world after the end. Like the rest of the band's previous works, this is not the simple end of the world topic that most bands do, they make it interesting. Using more descriptive lyrics and topic that aren't as easy to decipher upon first listen, this band is separating themselves farther and farther away from the rest of the black metal pack with these unique lyrical style.
The title track of this album starts it with a large, and rather impactful, bang. Ylem feature catchy riffs and roaring vocals that will start this album on a rather high note. While the following song, As The World Keels Over, is much more melancholic sounding, building slower into the heavy sections. These two opening songs are better sounding than most band's entire albums.
Guitar players V. Santura and Asvargyr do an excellent job at providing parts that don't have an average sound to them. Their playing style is filled with little quirks that make the guitars very melodic sounding, but also have the edge into progressive and doom territory. Solos are galore in this album, and are very catchy and melodic sounding for a band whose sound is rooted in extreme metal to have such catchy solos.
Bass is audible in the mix, something that can't be said for a lot of black metal bands, or bands in general. The bass has it's parts in the sound, not trying to stand out during most parts, but coming out into others like on the song Evenfall. The keyboards have a similar effect. Where they remain in the back for most parts, but do emerge in the forefront of the sound during a song like Osiris. The keyboards offer a lot of dreamy effects and atmosphere to the sound of "Ylem."
Drummer Seraph displays his ability fully in the song Redivider. Nothing played on this album would sound as good if you have an average sounding blast beat, constant double-bass sound to these drums; Seraph makes these song accessible to drummers that are into more "sophisticated" drumming styles that are not found in everyday extreme music. Though more typical moments are found here, this is showcased when it almost feels like there should be.
Vocalist Morean has another thing going for him besides being a superb lyricist, he is an excellent front man and vocalist. Adding different colors to the sound of Dark Fortress with styles that vary according to song. From the more traditional black metal scream on the Ylem, the death growls on The Valley, almost chanting like speaking and melodic singing on Evenfall, or foreboding bellows on Silence. Morean has added a lot to this album with his unique take on vocal variations.
The last two song on this album bring it together in an almost book end style. The Valley takes Celtic Frost like heaviness to a new level of intensity. This track hammers you down to about as low as you can go before finally dissolving. While the final track, Wraith, brings this album to a conclusion. Starting with very beautiful guitars then moving into dark metal territory. Morean displays his clean vocals on this song, giving it that extra color that makes this track stand out even more. The clean vocals display a more melodic style unlike that of any other metal singer out in the scene today. This could be the most melodic and progressive song on "Ylem."
One song on this album can't give you an overall sound of this album. This is possible on of the most diverse sounding albums I've listened to from the black metal realm, with parts that defy this band from sounding like anyone else. The only comparison that this band could be drawn to is the legendary Celtic Frost, but that isn't even a bad comparison because that sound similarity isn't even that close to how this band sounds.
This is possibly one of the best albums of the year so far, if not for the whole thing. This album is definitely worth checking out for a fan of extreme music, progressive music, or people who like variety in their music. The successors of the legendary Celtic Frost have taken hold of their crown and have made their statement clear. This is a defining moment in extreme music. Check this out or die.
Overall Score: 10 - Classic
Highlights: Every song is a highlight
Posted by maskofgojira at 10:35 PM