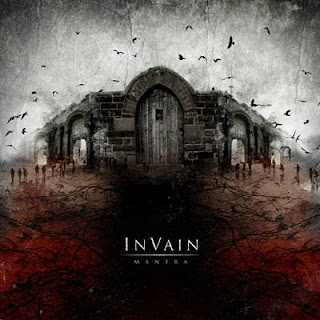 A Luring Spell of Darkness.

In Vain is a Norwegian progressive black metal band. "Mantra" is their second album and the follow-up to 2007's "The Latter Rain." This album shows a greater increase in certain elements while losing some of those that made the band unique on their debut.
In Vain is a band who progressive side is always showcased through the album. Through the use of powerful guitar and keyboard solos and lengthy songs. They've stated that their influences range from extreme metal to more ambient and jazz music, and all of this is shown on "Mantra." Though some of the more jazz elements are not as present as on their debut, which used brass instruments and strings more presently in it's sound, "Mantra" has a much more Opeth or Enslaved approach toward the progressive side of it's sound. Being more focused on songwriting rather than bringing together a large amount of influences and throwing them at a wall and seeing which stick.
This album, as well as the debut, shows a large amount of talent in this band. Being able to open with a very progressive sounding opener, Captivating Solitude, and following it with Mannefall, an incredibly heavy and death/doom song. The opener showcases the overall sound of this band, being incredibly melodic and psychedelic sounding. The vocals have more of a death metal approach to the growls and screams, but once the chorus comes in, by keyboardist Sindre Nedland, it has a very ICS Vortex vibe to it, being almost folky sounding. This opposes the very heavy sound of Mannefall. This song combines the sound and melody of a My Dying Bride song with a very Borknagar vibe, giving it a very unique sound.
The next two songs kind of work together. The third song, and kind of interlude song, Ain't No Lovin', has a very country sound to it with only clean vocals, and acoustic guitar, and a dark sounding atmosphere to it. This track leads into On The Banks of The Mississippi, which continues the more doomy sound with folky melodies. This song has very melodic structure with a lot of guitar solos. This will appease all those prog-heads looking for more extreme bands. This also continues the Opeth/Enslaved sound of very melodic prog songs.
From here on in, every song is over 9 minutes long. Circle of Agony takes the whole melodic prog approach and mixes it with more of a thrash metal sound. Wayakin (The Guardian Spirit of The Nez Perce) is an epic piece of music that shows a huge Borknagar and Enslaved influence. From it's more epic sounding beginning to the chanting that makes up it's vocals, this song has a folkish melody soaring throughout the whole song. But the sound of the chanting gives off the sound of almost native American or Indian warriors fighting before the chorus kicks in. Dark Prophets, Black Hearts is a song that has more focus on a melodic black metal type of song. This song could be compared to the opener Captivating Loneliness because of it's more structured approach. When that acoustic section comes in, it becomes the most beautiful part of the song, with acoustic guitars accompanied by a string section that sounds very classical.
The final track, Sombre Fall, Burdened Winter, is epic as well, with more simplistic opening to it's very viking styled heavy sections. Going from pretty folkish acoustic parts into more viking and epic heavy sections really fits for a strong closer. There is also more of their less metal influeces that seep into this song, from jazz to more classical sections that are covered on this song. While this is the most experimental and longest song on the album, it is also the song which resembles their debut the most.
Overall, this is a very strong piece of extreme metal. A very epic follow-up to an equally great debut. In Vain has brought in more melody on this album as oppose to jazzy experimentation, and it works. Fans of extreme and progressive metal should have no problems with this album.
Overall Score: 9.5
Highlights: Every song is a highlight
Posted by maskofgojira at 12:22 PM